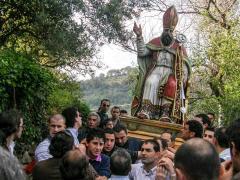 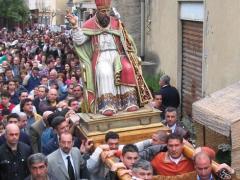 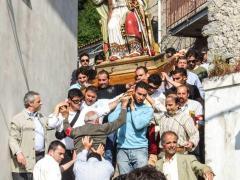 Ratings, Comments and User Experiences
Rate it (1 to 5)
0.000
Location
91 Via Armando Diaz Note: The populating of the cards of the Heritage database proceeds in incremental phases: cataloging, georeferencing, insertion of information and images. The cultural property in question has been cataloged, georeferenced and the first information entered. In order to enrich the information content, further contributions are welcome, if you wish you can contribute by providing information and / or images also through the facebook group "Heritage Sicily"

N. Prog. 118
Well: Feast of San Leone
Book: REI - Book of celebrations
Approval date: 20-10-2008
Category: Patronal feast
Province: Messina
Municipality: Sinagra
Local denomination: Miracles of Santu Liu
Chronological News
Leo II, known as the Wonderworker, was born in Ravenna in 710 and was appointed the bishop of Catania in 765, dedicating himself to fighting heresies. In his bishopric in the Byzantine Empire, iconoclasm was in progress, i.e. the destruction of sacred icons and those who did not obey the edict were incarcerated. Leone opposed this law and for this reason the governor of Sicily ordered his arrest and Leone was forced to take refuge in the mountains probably in Sinagra (Vallone d'Orecchia) where he lived as a hermit in a cave. After many years he returned to Catania where he resumed his episcopal seat and where he died on February 20, 789.
The cult of the holy bishop has remained alive in the memory of the archdiocese of Catania. Promoters and great disseminators of devotion to the saint were the Benedictine fathers. Despite being included in the calendar of celebrations on February 20, the Saint in Sinagra is celebrated on Easter evening and on Easter Monday. The feast of San Leone in fact recalls the legend of the attempted theft of the remains of San Leone, according to which some Catanesi, in an attempt to steal the remains of the Saint, on Easter evening, after walking all night, at dawn, they found themselves at the same starting point and frightened by the event they fled.
Recurrence: Annual
Date: February 20
Occasion: Easter Sunday and Monday, 8 May
Function: Celebratory / Devotional
Actors: Civil authorities (the Mayor) and religious authorities (bishop and parish priest), the bearers of the launch of the Saint, the brotherhoods
Participants: Local community of devotees, tourists
Description
The feast of San Leone is a celebration dedicated to the patron saint of Sinagra which consists of two moments: Easter Sunday, Easter Monday and May 8th.
The interest revolves around the celebrations of the patron saint San Leone, whose recurrence falls on February 20, but for an ancient custom it is celebrated on the evening of Easter Sunday, when the statue of the saint is carried in procession from the country church to the town. . Young and old, all lined up, to carry on their shoulders the statue of the town's patron saint, San Leone, who preferred Sinagra to the role of Bishop of Catania, in the last part of the procession the launch with the statue is pulled "running" on the bridge located at the entrance to the town around 23.00 pm, after the procession, which proceeds slowly, which lasts about four hours, with the classic "two steps forward and one step back", which symbolizes the indecision of the saint in returning to Catania , where he carried out the activity of Bishop. At the sight of the town the Saint "has no more doubts", he chooses Sinagra and goes to meet his people running wildly. This phase of the feast of Easter Sunday is called "Miracles of Santu Liu", Or rather a run of the heavy statue of the Saint, devoutly carried on the shoulders of the faithful, shouting"long live Santu Liu”, Which bursts into the crowd.
Tradition has it that during this phase of the celebrations, in the past as still today, the "Miracles of Santu Liu ”.
The festival continues with the Easter Monday procession which in ancient times coincided with the Easter Monday fair; during the day there is also "The Easter Monday Fair" in the past much felt.
In a similar way to the "Easter Race", on May 8 the Patron Saint's Day is repeated, during which parades of marching bands and fireworks are held with great participation of the people. The spectacular running crossing is repeated starting at 15,00 pm and after crossing the town, the simulacrum stops in front of the "stone of San Leone", in the district Vallone d'Orecchia, where tradition tells of the encounter between the holy miracle worker and the devil chased away by his gesture (the sign of the Cross, which today is engraved on the stone). The procession ends with the arrival at the Mother Church where the Simulacrum will remain until November 1st, to then be brought back to the country church for the winter season, in memory of the saint's hermitage.
Catalog Sheet
References
Alaimo, Francesco. 1998. Nebrodi. Travel notes between history and culture of the Park Municipalities, Palermo: Fabio Orlando Editore.
Falcone, Nino. 1977. Nebrodi religious festivals, Marina di Patti (ME): Pungitopo Editions.
Giunta, Giuseppe. 1985. History, folklore, monuments, landscapes of 65 places in the Messina area, Messina: Grafiche Scuderi sas
Card Author: Chiara Dell'Utri
Information on geolocation and the route to reach the place
View the place with Street View (if any). Relevant only if referring to tangible assets with associated address.
Location
Send a notice to the publisher
[contact-form-7 id="18385"]