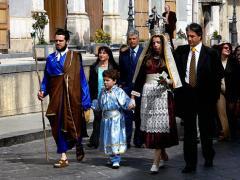 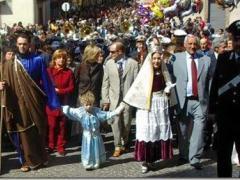 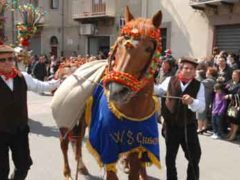 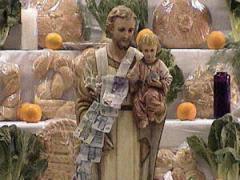 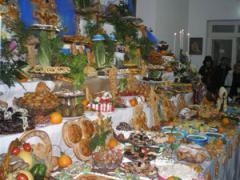 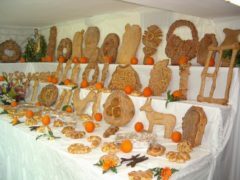 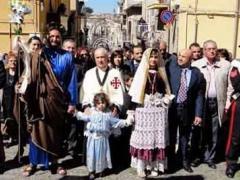 Ratings, Comments and User Experiences
Rate it (1 to 5)
0.000
Location
74 Via Giacomo Matteotti N. Prog. 107
Well: Feast of San Giuseppe
Book: REI - Book of celebrations
Approval date: 28-04-2008
Category: Party / Ceremony
Province: Enna
Municipality: Valguarnera Caropepe
Local denomination: San Giusepp
Chronological News: The fercolo was built in 1827 by Don Vito Boscarino and restored in 1922.
Recurrence: Annual
Date: From 10 to 19 March
Occasion: Celebrations in honor of St. Joseph
Function: Devotional
Actors: "The Saints", that is St. Joseph (an adult with a thick white beard, blue tunic and brown cloak, in his hand carries the stick with the Lily on top, a symbol of purity), the Madonna (chosen among the most graceful girls of the country, elegantly dressed in burgundy dress, embroidered cloak and on her head a silver crown that is supported by her father, she has a chaplet and a prayer book in her hand), Baby Jesus (wearing a light blue tunic and has a halo on her head) .
Participants: Faithful, local community and visitors
Description
The entire Valguarnerese community celebrates the Patriarch of Saint Joseph from 10 to 19 March. The feast is in fact preceded by a novenary, whose meditations are guided by the parish priest who invites the faithful to reflect on the figure of St. Joseph, a just man, protector of the family and giver of graces. The Patriarch is prayed and implored for the families, the people, the benefactors and the sick. In the ten to fifteen days preceding March 19, the devotees, in thanksgiving to the Saint for a grace received, set up the "Tables of St. Joseph", as a translated form of celebration of the awakening of nature thanks to the imminent arrival of spring. This requires the collaboration of relatives and friends who will do their utmost to prepare all the dishes intended for setting the tables. These are made of wood and have a large table at the base on which a staircase of four or five steps, about three or four meters long, is created. Everything is covered with fine linen and embroidered tablecloths. The dishes are closely linked to the culinary tradition of the feast of St. Joseph:loaf (pickled with honey), cannoli with ricotta and cream, sphinx, cassatele, nougat, almonds, sugared almonds, fried various vegetables such as fennel, spinach, broccoli with a sprinkling of breadcrumbs on top.
The absolute protagonist is the bread that is prepared by local bakers with durum wheat flour and, after being worked by hand and modeled in different shapes that symbolize the tools of the carpenter (saw, hammer, ladder) and other shapes (monstrance, angels , grape, donkey), is then finished with a brush of egg and a shower of paparina (poppy seeds) and put in the oven. Other forms of bread smaller than those placed on the table are i pupiddri of San Giuseppi. These are distributed both in the tables of the devotees and in the church where the main table is set up. Between each loaf of bread, and among the plates as an ornament, usually oranges, lettuce, celery and fennel are arranged.
On the morning of March 19, the procession of the Holy Family winds from the sacristy of the church: the three people representing the Holy Family, followed by the musical band, relatives and a large number of faithful, after having walked the streets of the town, return in church to attend the solemn mass. Immediately afterwards they will go to the sacristy of the church, where the main table is generally set up. Together they will repeat this ancient prayer in the local dialect three times: B'n'ritta la zena - B'n'ritta Maddalena - B'n'rìtt all quant - U patr, u figghj eu spir't sant. St. Joseph will then peel an orange and divide it with the baby Jesus and the Madonna, together with pieces of blessed bread, and then continue with the other dishes. The table will then be open to those who want to taste the typical dishes of the feast and will empty the steps of the table except the last one which is reserved for the dishes that will be given to the Saints.
On the evening of March 19, after mass, the procession of the Saint begins, which is carried on the fercolo through the main streets of the town. The procession is attended by the brotherhoods of the various churches (the brothers wear clothes that recall the colors of the brotherhood they belong to), the civil authorities and the barefoot faithful with votive torches in hand.
References
Buttitta, Ignazio Emanuele. 1999. The flames of the saints: ritual uses of fire in Sicilian festivals. Rome: Meltemi Editore, “Gli Argonauti” Collection.
Cipriani, Roberto and Luigi, Lombardi Satriani, edited by. 2013. Food is the sacred. Rome: Armando Editore.
Napoleone, Caterina, edited by. 2006. Encyclopedia of Sicily. Parma: Franco Maria Ricci Publisher.
Notes
Of particular interest is the preparation of loaves covered with poppy seeds, a flower sacred to Demeter and a symbol of fertility, almost as if it were a continuation of Chthonian rites.
The rite of the supper stems from the fact that St. Joseph and Mary, as poor, were refused a refuge for childbirth, just as they were forced to flee to Egypt and live clandestinely. Therefore, as a sign of Christian charity, the devotees want to symbolically welcome and refresh the Holy Family.
According to an ancient tradition, on the eve of the feast, a bowl with water and a salt shaker is placed on all tables, where the fingerprint of St. Joseph will be found the next morning, who spent the night to bless it.
The fercolo has a dome with golden reliefs and inlaid with stars and other particular designs of excellent workmanship. The author is unknown but he must have been a great craftsman.
Card Author: Paola Barbata
Information on geolocation and the route to reach the place
View the place with Street View (if any). Relevant only if referring to tangible assets with associated address.
Location
Send a notice to the publisher
[contact-form-7 id="18385"]