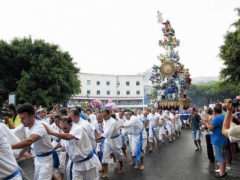 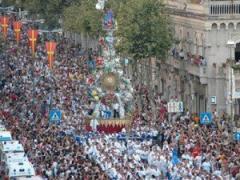 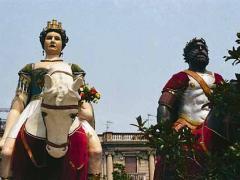 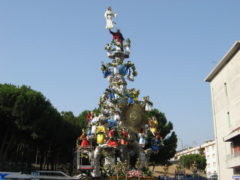 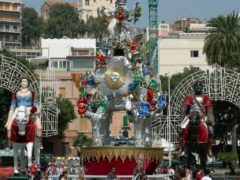 Feast of the Assumption - Messina N. Prog. 116
Well: Feast of the Assumption
Book: REI - Book of celebrations
Approval date: 19-05-2008
Category: Patronal feast
Province: Messina
Municipality: Messina
Chronological News
The cult of the Assumption spread throughout the Catholic world even before the official proclamation of the Dogma, which took place in 1950 by Pope Pius XII. The Messina festival has very ancient origins: the Pitrè traces rites and traditions linked to it since the seventeenth century.
Recurrence: Annual
Date: August 15
Function: Devotional / Patronal
Actors: Shooters: for devotion handed down from father to son, the so-called shooters, have the task of dragging, by means of long ropes, the Vara, representing the Assumption of the Virgin Mary, incited by the cry of “Viva Maria”. They wear white clothes and are barefoot.
Participants: Local community, tourists
Description
The festival celebrates the Assumption of the Madonna and takes place between religious rites and popular traditions. The religious celebrations begin with the evening mass on the eve of August 14, officiated at the foot of the majestic Items votive: a real machine with movable scenographic apparatus, 13,50 meters high and made up of scenes and figures representing, in the lower part, the death of the Virgin and, in the upper part, the triumph of the Assumption. On the morning of the 15th the Vara, attaching ropes to it with which it will be towed along the three-kilometer processional path. The actual beginning of the festival is signaled by the firing of some cannon shots from the statue of the Madonna della Lettera at the port; therefore the morning is dedicated to religious celebrations, while in the afternoon the procession begins. The route starts from Piazza Castronovo: la Items is pulled by shooters along via Garibaldi; at the intersection with via I Settembre there is what is traditionally called the "turn", a complex maneuver that must rotate the Items on itself to allow it to enter along the street. The route ends in Piazza Duomo. The shooting of the fireworks from the port concludes the party.
References
Cardella, Antonio. 2002. Holy rites and legends of the Sicilian people. Palermo: Sigma.
Croce, Marcella. 2004. The seasons of the sacred. Almanac of popular festivals. Palermo: Dario Flaccovio.
Pitre, Giuseppe. 1979. Patronal festivals in Sicily. Sala Bolognese: Ovens.
Notes
La Items, 13,50 m high, is a complex scenographic machine whose origins seem to date back to the sixteenth century. It consists of a pyramidal structure, divided into various scenic levels, which hides a series of complex gears: these are manually operated and allow the various movements. At the lower level is represented the tomb of the Madonna surrounded by the apostles; in the upper part there are papier-mâché statues depicting angels rotating together with the Sun and the Moon. At the next level is the representation of the sky (a starry globe), surrounded by the band of the zodiac. At the top, between angelic figures, there is the Christ holding the Madonna in the palm of his right hand. Initially, between the moving and rotating planes of the Vara, figures and children were placed in the guise of angels, secured to the mobile structures, while at the top, a man and a woman depicted Christ and the Assumption. Today the figures are all in paper mache, except for some children placed at the base of the structure. Linked to the festival, but not to the devotional rite, are the figures of the "Giants", pulled along the city street the days before August 15th. These are two colossal papier-mâché statues depicting a man, Griffin, and a woman, Mata, on horseback. The traditional "walk of the Giants" is linked to ancient traditions and myths. There are several hypotheses regarding the correspondences between the equestrian statues and the characters they represent, it is however certain that they are all linked to the history and legends of the city of Messina.
Author Profile: Mariangela Riggio
Information on geolocation and the route to reach the place
View the place with Street View (if any). Relevant only if referring to tangible assets with associated address.
Location
Send a notice to the publisher