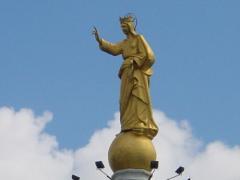 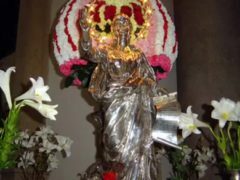 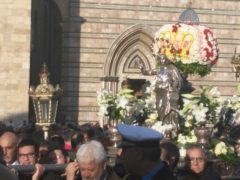 Feast of Our Lady of the Letter

According to the tradition of S.an Paolo, arrived in Messina to preach the Gospel, converted many citizens and when in the 42, St. Paul was preparing to return to Palestine, some of Messina asked to accompany him in order to get to know the Madonna in person. So a delegation of Messina went to Palestine with a letter, in which the many fellow citizens converted to the faith of Christ professed their faith and asked for Mary's protection.

Maria, in response to the letter, sent back one of hers letter, written in Jewish, rolled up and tied with a lock of her hair now kept at the Cathedral of Messina and exhibited on the day of Corpus Christi set in the mast of a small galleon built in silver, which represents one of the examples of the protection of the Madonna for Messina.

The cult of the Madonna della Letter was established only in 1716, the year in which the monk Gregorio Arena brought to Messina a translation from the Arabic of the letter of Mary. Since then the city of Messina has celebrated the festival on 3nd June, with a crowded procession of the silver fercolo of the Madonna. The text of the letter delivered to the Messina delegation reads:

The phrase Vos et ipsam Civitatem benedicimus ("We bless you and your city") is now written in large letters at the base of the stele of the Madonnina on the far arm of the port of Messina.

It should be noted that the date indicated in the text of the letter is incongruent, since at that time there was no Christian dating.