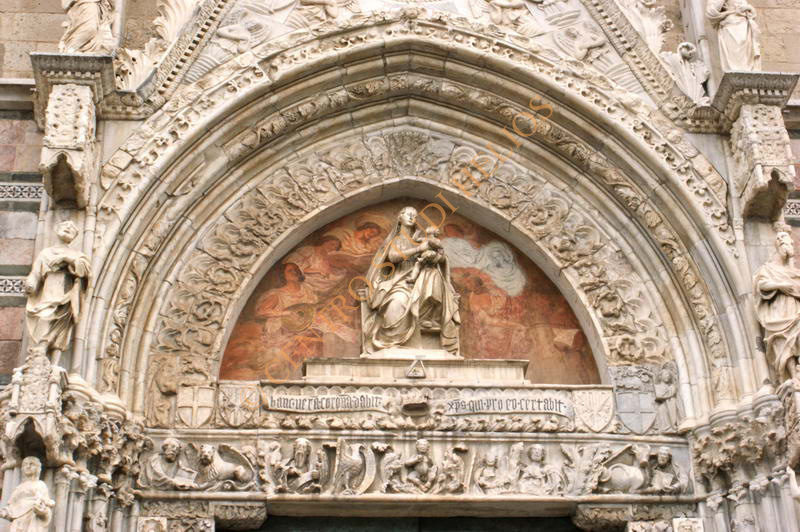 LOCATION Piazza Duomo DATING IX-XX CENTURY. DESCRIPTION Its foundation is probably to be placed before the Arab invasion, desecrated by the Arabs, it was re-consecrated after their departure in 1192 in the presence of Archbishop Berzio, Emperor Henry VI (son of Barbarossa) and his wife Costanza d ' Altavilla. The wooden roof made by Arab craftsmen was destroyed by a fire in 1254 during the funeral of Corrado IV, son of Frederick II of Swabia. Since 1300 a series of changes follow one another which, if on the one hand artistically enrich the cathedral (mosaics in the apses, portal, facade), on the other they distort the original Norman appearance. Later, damaged by the earthquakes of 1638 and 1783 which ruined a large part of the facade, it was almost entirely destroyed by that of 28 December 1908. The earthquake spared only the apse and brought to light many elements of the primitive Norman construction. The reconstruction of the 20s restored the original appearance by recovering most of the works of art and mosaics. The bombing of 13 June 1943 caused a terrible fire that irreparably destroyed much of the interior. The current structure, which was chosen as close as possible to the original, maintains valuable parts from the XNUMXth to the XNUMXth century on the outside. Of particular note is the facade with the magnificent Gothic style portal and the beautiful fifteenth-century windows on the right wall of the cathedral (the portal on the right side is attributed to Polidoro da Caravaggio). Inside the Cathedral of Messina, divided into three parts by a double row of 13 columns, you can admire the mosaics, some funeral monuments, including that of Guidotto de Tabiatis, archbishop of Messina in the 1525th century, and some statues of saints, the San Giovanni Battista by Antonello Gagini from XNUMX. Furthermore, the organ inside is more than noteworthy: the second largest in Italy (the first is that of the Milan Cathedral), and the third in Europe, with 5 keyboards, 170 registers, 16.000 pipes distributed in the two sides of the transept, behind the altar, on the main door and on the triumphal arch. It is the work of the Tamburini company of Crema in 1948. The bell tower, 90 meters high and with a base of about 10 meters, has the largest and most complex mechanical and astronomical clock in the world on the outside, made by a Strasbourg company, the Ungerer brothers: inaugurated in 1933, every day at noon the various statues move spectacularly to the sound of Schubert's Ave Maria. The figures of the bell tower recall the War of the Vespers of 1282: The Lion at the top represents the Sicilian people victorious over Charles of Anjou and the Guelph army sent by the pope against Sicily; Dina and Clarenza represent the women of Messina who helped the men to defend the city; the rooster between the two female statues represents the Franco-Papal army; the disappearing church recalls the Colle della Caperrina, site of the battle of 6 and 8 August 1282, the last attempt by Charles of Anjou to enter the city from the hills to the west.