Convent of the Rosary - Scicli 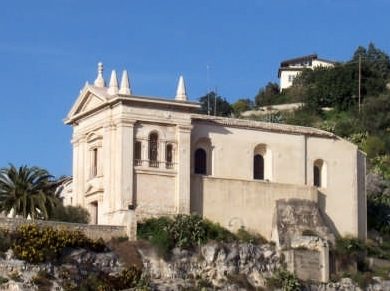 The church dedicated to the Madonna di Monserrato, today called del Rosario, was enlarged by numerous devout Sciclitans. Rocco Pirri in "Sacred Sicily" describes the first construction of it in the year 1516, as we read in the Act of the notary Antonino Militello of 1539 from which the main benefactors are: Antonino Schifitto, Paolo Ficicchia, Cola Tommaso Maltisi, Antonino di Falco , Antonino Ioccia and Giuseppe Cappitta.
The place for the construction was chosen on the top of Monte Campagna, with a magnificent panoramic view of the Sciclitano territory and sea.
A statue of the Virgin Mary venerated in this church performed numerous miracles and healings of the sick. It was placed in the Chapel of the High Altar in 1648 by P. Domenico Rosa of Scicli. The miracles are recorded in a book kept in the Convent. The volume “Madonne Sciclitane” also tells of an oil cruet found in the church in 1600, and in which the liquid never ran out. The oil, smeared on him, healed the sick troubled by infirmities.
The image of this prodigious statue appeared reassuring to the Grand Master of the Order of the Knights of Malta, before defeating the Turks, around the year 1565, and, grateful for this, he donated to the Church huge booty conquered to the Muslims (weapons, trophies , flags etc.) and forty bronze mortars of which melted, the bell was manufactured which still today is attached to the artistic bell tower of the church.
Pirri reports that in the “Historia Domenicana” we read of the Convent, which began its activity through Fr. Merlino in the year 1556 and that the Bishop of Syracuse Giovanni Orosco granted to Frs. Dominicans take possession of the Convent and the Church on April 29, 1567.
The Convent had been suppressed with Pope Innocent's Bull of 1652 because it did not have the necessary means for the maintenance of the Monks. It resumed its activity through land donations made by Sciclitan families for which Schools of Theology and Philosophy flourished within it, from which priests of great intellect emerged who distinguished themselves for charity, holiness and because they were talented preachers of the Gospel and lovers of literature. Among these the most famous were: Fr. Bacillieri, Fr. Br. Marni (Missionary and preacher in Spain and the Indies, who died in the odor of holiness), Fr. Decio Mirabella of Scicli, Fr. Decio Abarca, Fr. Guglielmo Dinaro, Fr. Domenico Rosa, Fr. Baldassarre Rosa, Fr. Antonio Rosa, Fr. Giacinto Frasca, Fr. Domenico Furnari.
The earthquake of 1693 only devastated the chapel of the Church which was restored by the aforementioned P. Rosa.

(Source Site of the Municipality of Scicli)

Click to see on Google Maps
47 Via San Domenico, Scicli, RG
Rate it (1 to 5)
0.000
Send a notice to the publisher
[contact-form-7 id="18385"]
Deactivate the Youzify Membership System to use the theme's login form here.