It is a mountainous area at altitudes between 700 and about 1100 m, affected by siliceous substrates mainly represented by flysch, schist and gneiss. The bioclimate
it is part of the Mesomediterranean with a sub-humid shadow type. At the highest altitudes, small strips of Cerrete are found, while the oaks are widespread below.
deciduous to Quercus congesta. Small strips of deciduous woods with Quercus ilex are found on the more rocky slopes. The presence of children is also significant
strips of scrub with Laurus nobilis. There are also frequent bushes with a prevalence of thorny shrubs linked to the processes of degradation of forest formations. In
situation of greater soil erosion, the latter are replaced by mesophilic pastures, at the highest altitudes, and by steppe grasslands at the lowest ones.
site there are four distinct aspects: 1) Formations in equilibrium with the environment near the watercourse of the valley floor with Laurus nobilis L., Cornus
sanguinea L. (very rare species in Sicily), Quercus virgiliana Ten., Q. ilex L., Rosa sempervirens L., Rosa canina L., Senecio lycopifolius Poir. in Lamarck,
Arundo plinii Turra, Fraxinus ornus L., Ulmus minor Miller, etc. The associations to which these formations are more approachable are the Lauro-Quercetum
ilicis and Viburnum tini-Fraxinetum orni-lauretosum nobilis, associations however described only for the Iberian Peninsula; in any case both these and the formation of
Contrada Giammaiano are ascribed to the Quercetea ilicis (code 5230). 2) Formations similar to the previous ones but not in balance, and rather rapidly
evolution towards climatic forms, within former farms that have been abandoned for decades. Here Laurus nobilis tends to expand, supported in this trend by
underground horizons of the soil rich in humidity. Companions massively present in this work of spontaneous reconquest of naturalness are Senecio lycopifolius
Poir. and Agrimonia eupatoria L. The abandoned crops hosting these processes were destined for the cultivation of Prunus avium (Cherry). 3) Mexican crops, subject to
plowing several times a year. 4) Thermo-Mediterranean formations of pre-desert type. In most of the area there are Lygeti attributable to the Lygeo-Stipetea class
(code 6220), and moaico with these formations classifiable as Ampelodesmeti (guide species Ampelodesmos mauritanicus (Poir.) T. Durand & Schinz,
code 5330).

4.2Quality and importance
In this area located on the southern slope of the Nebrodi, although it is rather degraded, it still preserves examples of forest vegetation typical of
this area of ​​the island. Here there are also various entities which in the regional area are rare or considered to be of significant phytogeographic interest, which are in turn mentioned
listed in section 3.3 (D). Significant laurel bush wreck. This area is highly significant as the laurel (Laurus nobilis) is a species
of tertiary training that with the passage from the climate of the era of its speciation to the decidedly colder and more arid one of the current era (Mediterranean climate)
has definitely contracted its populations and has sheltered itself in particular refuge areas where the climatic conditions are in a certain way close to those
of the period of its expansion. One of these areas is precisely the Vallone di Contrada Giammaiano in the territory of Capizzi, a valley protected from the climatic rigors by the
north side by the Nebrodi mountains and on the south side by the buttresses of Cerami. Laurel, together with many other species considered so far in a dead end of the movement
evolution of the biosphere towards homeostasis, in the current situation of great genetic-environmental upheavals it could return to play a role of great
importance in the strategy of nature towards the balance of resilience.A second reason for the rigorous protection of Laurus nobilis (and other similar species
strategic significance) in the sites where it is present lies in the need to establish a frontier line of fine techniques for the protection of the environments
humid (classic example of a dissipable but non-renewable resource): in addressing the practical problem of protecting humid environments, small and rare
acquire significant skills based on particular and rare habitats that can be put to good use in the no longer postponable commitment of safeguarding
much larger environments than coastal areas. 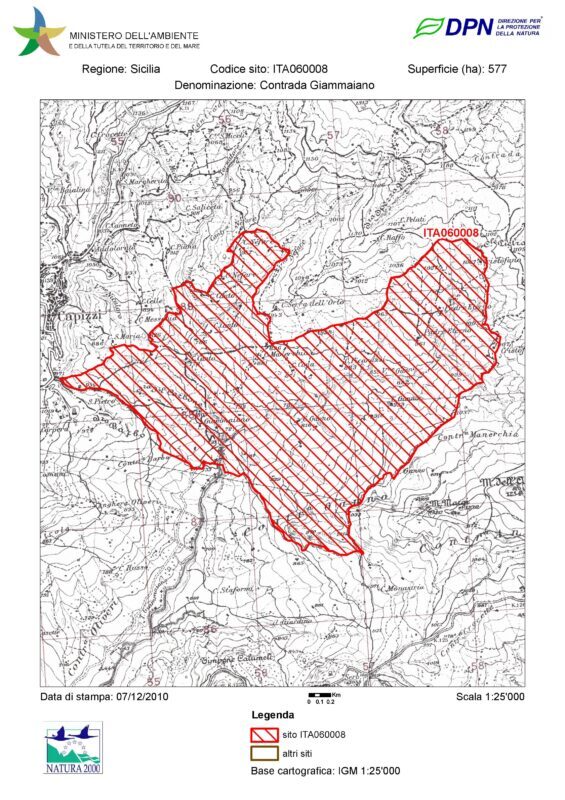 Click to see on Google Maps
Unnamed Road, Capizzi, ME
Rate it (1 to 5)
0.000
Send a notice to the publisher
Deactivate the Youzify Membership System to use the theme's login form here.