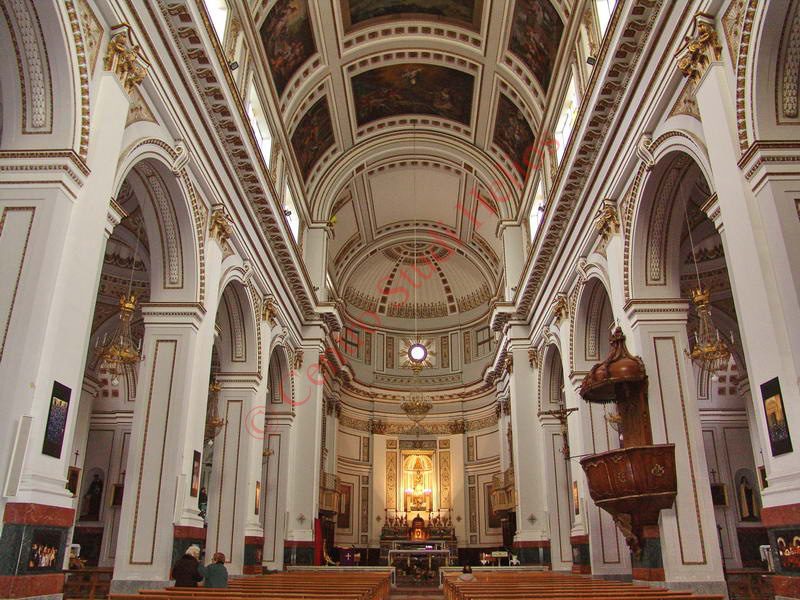 LOCATION:
Piazza Don Minzoni
DATING:
XII-XVII century.
DESCRIPTION:
Built in the twelfth century. Rebuilt in the 1545th century and enriched with stuccoes in the 1506th century It was dedicated to Santa Maria Maddalena. Three apses of Arab-Norman style remain of the original church. The facade, on two orders, remained incomplete in the facade where one of the two bell towers is missing. Above the three doors there are three marble statues from the first church. In order starting from the left the statues represent St. Peter, St. Mary Magdalene and St. Paul. Two other statues are above the doors of the lateral sides: S Calogero (on the Cosro V. Emanuele) and S. Giovani Battista (on the vicolo Duomo). All the statues are by Antonio and Gian Domenico Gagini. The interior, with three naves, is divided by two rows of Ionic columns. The fresco of the vault of the central nave is by Tommaso Rossi and depicts the Apocalypse of St. John (Transfiguration and the Celestial Glory), in the said lateral panels are depicted scenes from the life of St. Mary Magdalene. Among the various works contained inside we also have: Sepolcro di Bartolomeo Tagliavia (from the Gagini school); sarcophagus of Gerardo Noceto who died in 1581; a marble statue of the Madonna of the Chain by Bartolomeo Berrettaro (1503); the marble altarpiece attributed to Antonio Gagini (1491); the statue of the Madonna del Soccorso by Giuliano Mancino and Bartolomeo Birritaro (1922); a baptismal font from the Gagini school (XNUMX), the statue of the Madonna del Cardellino from the Gagini school. Since XNUMX the church has been elevated to a Basilica.