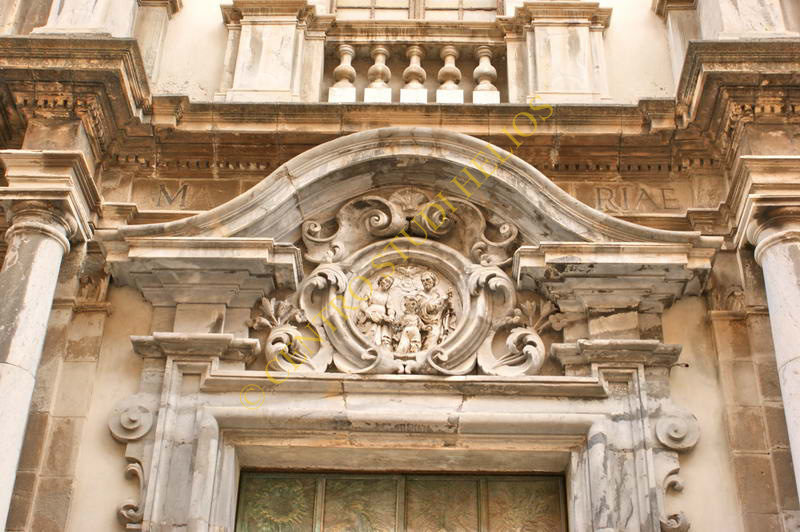 Built on a pre-existing church, dedicated to Santa Maria dell'Itria, which was sold in 1623 to the barefoot Augustinians who expanded by also building the adjacent convent, since 1923 it has been the seat of the Vincenzo Fardella Liceo Scientifico. The interior, with three naves, was renovated in the 1745th century. The baroque facade dates back to XNUMX and is the work of Pietro Castro. The façade on two orders has two niches in the lower part, today without statues, between Corinthian columns. In the second order there is a large window, corresponding to the entrance door. In the tympanum crowning there is the coat of arms of the Hermits of Sant'Agostino. Inside the church there are statues of Jesus, Mary and Joseph, works by Andrea Tipa (XNUMXth century) and the Crucifix by Pietro Orlando (XNUMXth century). Among the most important paintings: the canvas of S. Agostino, by Pietro Novelli (XNUMXth century), the painting of San Nicolò da Tolentino, by Andrea Carreca (XNUMXth century) and the paintings of the Archangel Raphael, of the Madonna dell ' Itria and of the Immaculate Conception, works by Giuseppe Felice (XNUMXth century).

The church is also known as the Church of S. Rita because the Saint of Cascia is venerated there.

Click to see on Google Maps
71 Via Garibaldi Giuseppe, Trapani, TP
Rate it (1 to 5)
0.000
Send a notice to the publisher
Deactivate the Youzify Membership System to use the theme's login form here.