Church of Santa Maria dell'Ammiraglio (Church of the Martorana) - Palermo

Bellini Square. Seat of the Parish of San Nicolò dei Greci. The church was built on the ancient city walls in 1143 at the behest of Giorgio d'Antiochia, admiral in the service of the Norman king

Ruggero II near the nearby Benedictine monastery, founded by the noblewoman Eloisa Martorana in 1194, hence the name "Santa Maria dell'Ammiraglio" or "Martorana".

What characterizes this church is the union of styles from the Arab-Norman to the Baroque.

In the 1740th century the central apse was destroyed and replaced by a new rectangular Baroque apse, designed by Paolo Amato. In 1846 Nicolò Palma designed a new façade, according to the Baroque style of the time, which overlooks the square. In XNUMX the floor of the square was lowered and the staircase was built.

Inside the church, the 1588 choir is divided into two parts. The Stories of the life of Jesus by G. Borremans and the Glory of the Virgin by Olivio Sozzi (1744) are frescoed. On the left is the Madonna del Rosario by Giuseppe Salerno known as the Zoppo di Ganci.

The entrance contains two mosaics originally placed on the facade: Roger crowned by Christ and George of Antioch at the foot of the Virgin, who holds an inscription stating that he erected the church from its foundations.

The baroque apse houses a lapis lazuli tabernacle donated by the Tsar of Russia, and the painting by Vincenzo da Pavia with The Ascension (1533). Among the works of art in the church is the wooden door on the right of the choir made by Arab workers in the XNUMXth century.

The Monument was recognized as a World Heritage Site, within the UNESCO serial site: "Arab-Norman Palermo and the Cathedrals of Cefalù and Monreale " 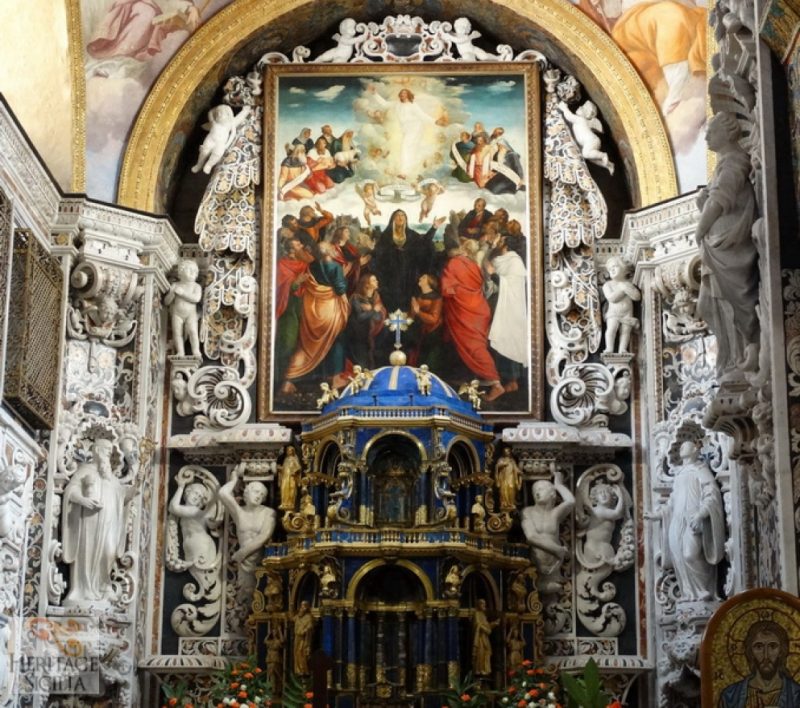