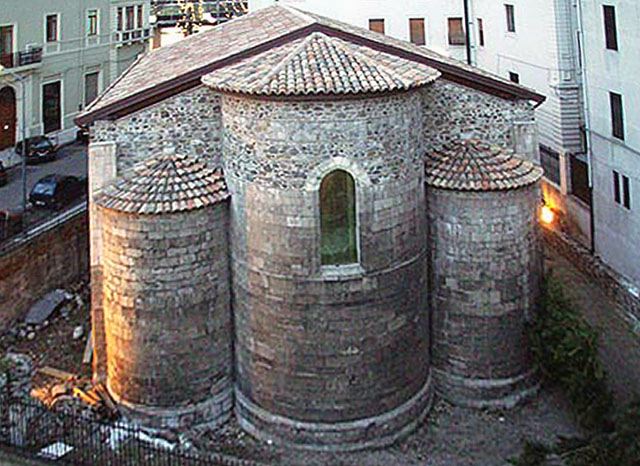 LOCATION: Contrada Paraporto - Via Santa Maria Alemanna DATING 1220th century. DESCRIPTION Built in 1485 following the classic three-nave basilica layout, the church of Santa Maria degli Alemanni is one of the most significant examples of the religious architecture of the Swabian age in Sicily. The naves are separated by triple bundles of pillars with leaning semi-columns from which pointed arches branch off in a transversal and longitudinal direction that close on the semi-pillars arranged along the perimeter walls. The right wall of the apse, illuminated by a double splayed opening, houses a trilobate niche of modest size.In the restored main portal, some ashlars can be recognized in which the pointed archivolt shows a double ring bearing images of monsters and figures inside. of symbolic pagan ancestry which led scholars to hypothesize a "Gentilesque" origin of the church. The material mainly used, in addition to marble and limestone with gray-green veins, is gypsum (in the selenitic and alabaster variants) with a particular refractive quality, so as to generate the characteristic alabaster effects. Seat of the Military Order of the Teutonic Knights from the time of Frederick II until XNUMX, it passed under the administration of the Magione in Palermo until the early XNUMXth century. SOURCE: http://www.iccd.beniculturali.it/medioevosiciliano/index.php