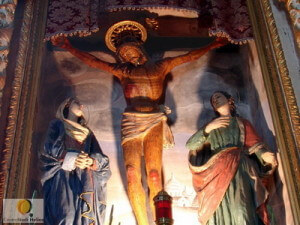 LOCATION: Giardini Iblei DATING: XIV - XVIII SEC SHORT DESCRIPTION: Built in the XIV century. Rebuilt after the earthquake of 1693. The Church of S. Giacomo or del Crocifisso dates back to the 1693th century and is located inside the Ibleo Garden. The Church was destroyed by the devastating earthquake of 900; the reconstruction works began immediately after a few years. The three-order façade was rearranged in the early XNUMXs and has a central entrance flanked by Corinthian columns supporting a triangular tympanum. At the edge of the façade, two large pillars on high pedestals cross the first and second order. At the center of the third order stands the belfry, with four Corinthian columns, and, on the sides, the balustrades with two statues arranged in correspondence with the underlying pillars: the left statue depicts St. James, the right one St. John the Evangelist. The interior of the Church, with a single nave with altars on both sides, has an interesting wooden ceiling magnificently frescoed with figures of the four Evangelists in the corners and celestial figures in the center.

Click to see on Google Maps
17 Via del Portale, Ragusa, RG
Rate it (1 to 5)
0.000
Send a notice to the publisher
[contact-form-7 id="18385"]
Deactivate the Youzify Membership System to use the theme's login form here.