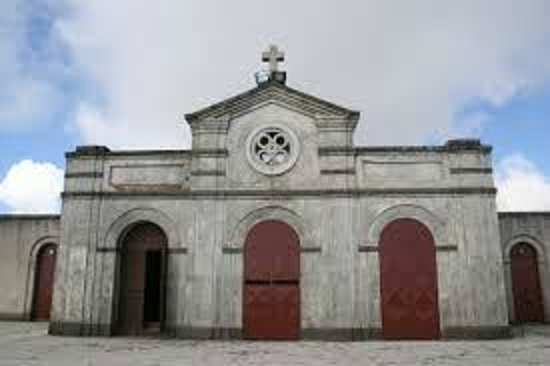 LOCATION: Monte Peloritani about 60 meters from the summit of Monte Antennammare (1127 m). DATING: DESCRIPTION: The name "Dinnammare", originating from the Latin "Bimaris", and linked to the fact that in that stretch it was possible to admire the two seas: the Ionian and the Tyrrhenian. On the site there was an ancient watchtower, in the Byzantine era a small church was built on the same place where the Madonna and subsequently the Santurio were venerated, which remained there until 1899, when it was demolished to build a fortress in its place. The Sanctuary was rebuilt not far away, where it currently stands. Every year on the night between 3 August at dawn, it is tradition to walk up from all the villages of Messina to the sanctuary, the painting of the Madonna, a nineteenth-century work by Michele Panebianco, is carried in procession, placed during the year in the church of Larderia, a village in the south of Messina. The sanctuary is surrounded by a large square, and on one side it is possible to admire the Ionian Sea, with the magnificent panorama of the city of Messina and the fantastic scenery of the strait; on the other side it is possible to admire the Tyrrhenian Sea,

FUN FACT: legend has it that the painting venerated in the sanctuary arrived there in a miraculous way in the Norman period. The Jesuit Placido Samperi in the seventeenth century. He says that while some fishermen were reviewing and reclining their nets, on the sea beach, closest to the mountain (the beach of Larderia) where the sanctuary is today, they saw two marine monsters coming towards the shore, holding a painting on their backs depicting Our Lady, after having laid him down, dived into the waves and disappeared. Filled with amazement, the fishermen ran to see the painting, seeing the Madonna depicted, they were moved and knelt on the beach, shedding tears of tenderness and kissed her thanking her for having wanted to come to their beach. The news of the prodigious landing spread and everyone rushed to see him and kiss him, the beach had become a sanctuary. Those good fishermen finally brought the picture to the summit of Dinnamare where the church of the Madonna stood. The pilgrimage from neighboring villages began. Everyone went to the mountain to cry and pray in front of the prodigious picture: and the Graces rained because they prayed with faith ”. The painting, in the sixteenth century. It was stolen and in its place a copy was venerated, which was carried on the mone only in Agoosto and remained for the rest of the year in Larderia. Subsequently a shepherd found on the summit of the mountain a stone tablet where the Madonna with Child in his arms was carved, he took it home, but the next day miraculously, the tablet was found again on top of the mountain. The shepherd brought her home twice and the tablet was found on top of the mountain twice. Upon hearing of the fact, the chaplain ordered the tablet to be brought to the parish. But once more the miracle was repeated and the next day the tablet reappeared on top of the mountain. At this point it was decided to place the tablet on the altar of the Sanctuary of Dinnammare which remained there until it was destroyed by lightning on 30 September 1837. In its place another stone tablet was placed depicting the Madonna and Child in arm and two dolphins carrying the image on their back.