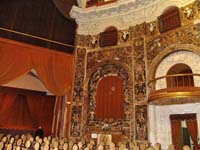 Corso Vittorio Emanuele. Erected in the seventeenth century. On a pre-existing church of the sixteenth century, in turn built on the site of the Norman monastery of SS. Savior of the twelfth century. The current appearance of the building, however, differs considerably from the Norman one, since the forms, already remodeled in the sixteenth century, became fully baroque with the assignment of the architect Paolo Amato (1682-1704), who adopted the model of a twelve-sided central plan with an elliptical dome. The interior, entirely decorated with polychrome marble and frescoes, was restored after the bombings of 1943 which almost completely destroyed it. The frescoes of the small dome that closes the main chapel are attributed to Filippo Tancredi (1705), the frescoes that decorate the entrance vestibule and the vault (1765) are instead attributed to Vito D'Anna. It is currently used as an auditorium

Click to see on Google Maps
Via Vittorio Emanuele, 392, Palermo, PA
Rate it (1 to 5)
0.000
Send a notice to the publisher
[contact-form-7 id="18385"]
Deactivate the Youzify Membership System to use the theme's login form here.