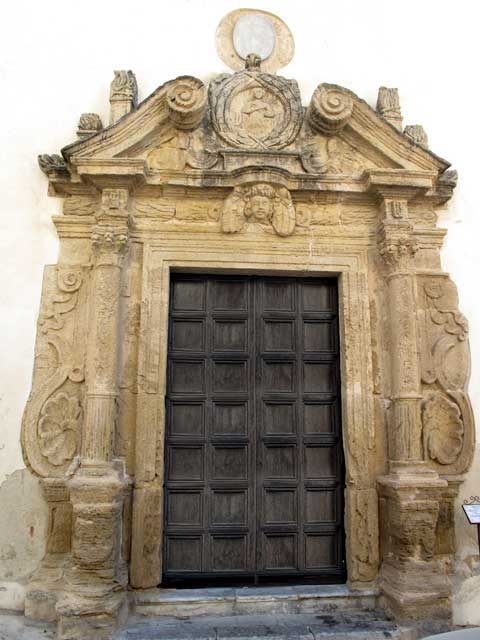 LOCATION:
Piazza Purgatorio (behind the Jesuit Church, reachable from both C.so Vittorio Emanuele and Via Licata)
DATING:
XVth century
DESCRIPTION:
Founded in the fifteenth century and rebuilt in 1480, it was initially dedicated to San Giovanni Battista Decollato, it changed its name after that in the early nineteenth century. I pass to the Congregation of Purgatory. The church with a single nave has a typical vertical construction, with two lateral cantons in hard stone. Of some interest is the Baroque portal above which is visible a medallion depicting a soul of purgatory in the flames and below, an angel's head. Above the medallion is the coat of arms of the Burgio family, to whom we owe the reconstruction of the church in 1480. The interior has three altars, on the main altar a large painting depicting the Holy Souls of Purgatory, by Mariano Rossi. Other canvases attributed to Tommaso Rossi, son of Mariano are: St. Peter, St. Paul, The Apparition of God to Moses, The burning bush, Beheading of St. John, Guardian Angel, The sacrifices of Isaac, St. John the Baptist, St. Michael the Archangel . The canvases depicting the Virgin with St. Anne, St. Joachim and the Flight into Egypt are by Gaspare Testone.