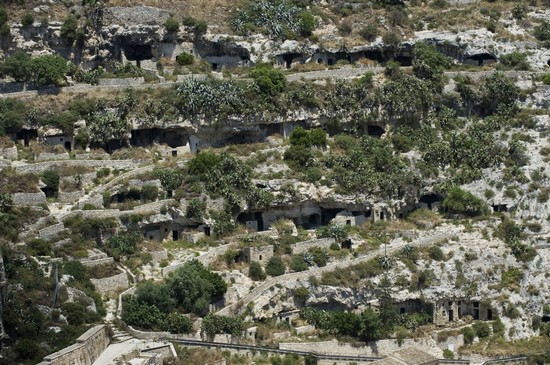 Located on the southern part of the San Matteo hill lies Chiafura, one of the oldest districts of the city of Scicli, with its hundreds of black mouths.
A very inhabited neighborhood until the 50s, today it is deserted following the Romita law on improper construction of 1954 which decreed the definitive abandonment of the neighborhood and the subsequent transfer to the new neighborhood of Jungi.
The origins of Chiafura are remote. In fact, it is thought that scattered houses date back to the Neolithic period even though it has been discovered that most of them belong to the Byzantine age.
Following the insecurity caused by the collapse of the Roman Empire, the populations began to climb towards the fortified fortress, which had already risen on the hill of San Matteo.
Most of the houses are located on the less steep side, the southern one: here, taking advantage of the great skill in quarrying the stone, the first nucleus of cave houses will be created under the stronghold of the city.
Following the earthquake of 1693 the castle was destroyed. In 1874 the Matrix was transferred to the Church of Sant'Ignazio in the new city and this decreed the end and the definitive abandonment of the hill, even if several thousand people continued to excavate their simple houses and to obtain inside, spaces and furnishings that were used for everyday life. In the nineteenth century, the end of the problem of raids caused by the Second World War and the demographic increase caused the progressive expansion towards the valley floor.
The western part, dominated by the "Castiddazzu", is characterized by terraces along its entire height.
Most of the caves consist of one or two quadrangular rooms, about 4 or 5 meters on each side; some of them are carved into walls that directly overlook the street; others are connected to the road through a courtyard in front. Part of these houses are spread over two floors, connected by internal stairs, also carved into the rock.
Over the last two centuries there has been an enlargement of the houses through the integration of the caves with structures built in masonry. The larger areas, in the various terraces, had to constitute the community space, the agora of the inhabited area, the center dedicated to public life. (Test source: Municipality of Scicli website)

Click to see on Google Maps
Via Chiafura, Scicli, RG
Rate it (1 to 5)
2.333
Send a notice to the publisher
[contact-form-7 id="18385"]
Deactivate the Youzify Membership System to use the theme's login form here.