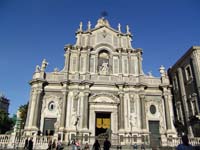 Piazza Duomo. Of Norman origin, it was built for the first time in the 1693th century on the Roman ruins of the Achillian Baths, destroyed several times by earthquakes and volcanic eruptions and was rebuilt in Baroque style in the XNUMXth century. first by the architect Girolamo Palazzotto and completed by Gian Battista Vaccarini after the last destruction that took place following the earthquake of XNUMX. Traces of the Norman temple are still visible in the body of the transept, in two broken towers and in the three semicircular apses, which, which can be visited from the courtyard of the Archbishopric, they are made up of large blocks of lava stone, most of which was recovered from Roman buildings of the imperial age. Furthermore, parts of the façade wall have been incorporated into the building built in the XNUMXth century. The façade has three composite orders in Corinthian and Attic style completely in Carrara marble. The interior has a Latin cross plan and is divided into three naves. One of the most valuable testimonies of the Baroque of Catania.

Click to see on Google Maps
7 Via Erasmo Merletta, Catania, CT
Rate it (1 to 5)
1.001
Send a notice to the publisher
[contact-form-7 id="18385"]
Deactivate the Youzify Membership System to use the theme's login form here.