Excellencies Excellences of Sicily Featured Palermo Arab Norman and the Cathedrals of Cefalù and Monreale
Palermo
Ratings, Comments and User Experiences
Rate it (1 to 5)
0.000
Location
494 Via Matteo Bonello

The entrance to the Cathedral of Palermo, dedicated to the Virgin Mary of the Assumption, is located in Piazza Duomo which can be reached from Corso Vittorio Emanuele (the Via Cassaro, the backbone of the ancient city). On the area of ​​the current Cathedral of Palermo, towards the fourth century. a first church was built which was destroyed by the vandals and of which no traces remain. In 604, a basilica dedicated to the Virgin Mary of the Assumption was built in the thick place, transformed into a mosque after the conquest of Palermo by the Saracens in 831. The basilica returned to Christian worship in 1072 with the conquest of Palermo by the Normans. The current Cathedral was built in 1185 by Archbishop Gualtiero Offamilio on the area of ​​the first basilica. The various construction phases followed one another for several centuries, causing the Cathedral to take on various styles.

Chronology of the different construction phases

1250: The two orders of the side towers are completed.

1342 Work begins on the construction of the last three orders of the four corner towers.

1352: Construction of the western portal is completed

1537: Construction of the northern portico (Fazio and Vincenzo Gagini)

1568 Completion of the new sacristy (entrance portals by Vincenzo Gagini)

1589: Construction of the chapels along the nave (Arch. Marullo)

1635: Construction of the chapel of S. Rosalia.

1659: The northern portal is redone

1709: The wooden roof of the side aisles is replaced by cross vaults.

1781 - 1801 Major restoration according to the project of the Florentine architect Ferdinando Fuga: Under the direction of Venanzio Marvuglia, Salvatore Attinelli and Frate Felice La Licata from Palermo, the radical transformation of the Cathedral is implemented, making it as we see it at present. The interior of the Cathedral is completely redone in the neoclassical style, with a Latin cross and three naves. The central nave that closes to the east with the large presbytery is divided from the aisles by a system of pillars against which the ancient columns of the Gualterian cathedral are placed against them for decorative purposes. The side naves were enlarged and ended by the chapels of the Sacramento (northern nave) and of S. Rosalia (southern nave). The northern portal was suppressed and the southern one moved to its present position. The renovations were actually much more invasive and radical than the Fuga projects, the restoration intervened to change the original appearance of the complex. The Gaginian Tribune is literally demolished, the statues initially placed outside, in 1952 are brought back inside and placed on shelves leaning against the pilaster strips. Traces of some elements of the Gaginian Tribune have been dispersed, except for some fragments kept in the deposits of the Diocesan Museum of Palermo.

1797: Creation of the baptismal font (Filippo and Gaetano Pennino)

1952: The marble flooring is created. The statue of the "Madonna della Conca d'oro" is placed on the bell tower

1961 Realization of the bronze door of the main entrance (Filippo Sgarlata).

Detailed sheet with description of the interiors:  The Cathedral of Palermo 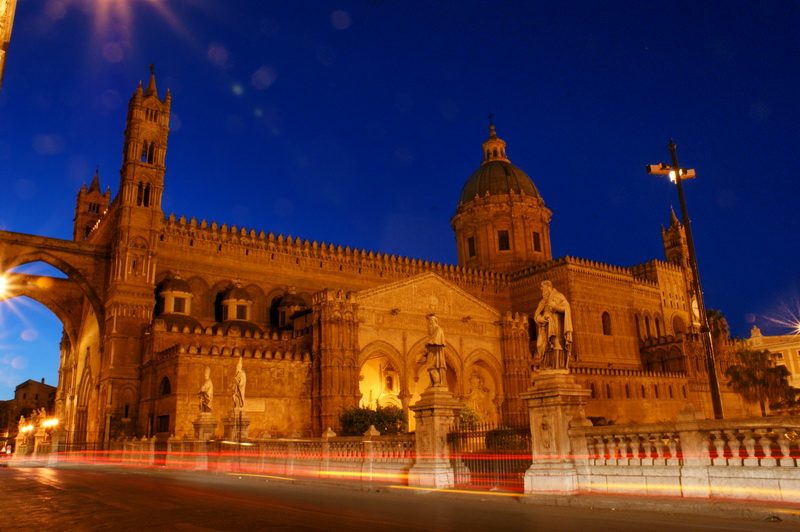