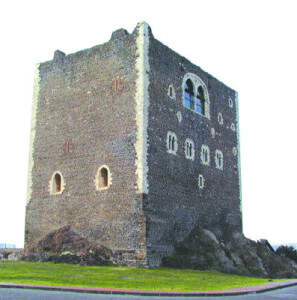 Symbol of the city of Paternò, the Norman Castle was built in 1072 by the Great Count Ruggero to guarantee the protection of the Simeto valley from Islamic raids. The first nucleus of the manor was soon enlarged and from its primeval purely military functions it was used for civil uses, becoming the stately home of the County of Paternò that Henry VI of Swabia assigned in 1195 to the Norman nobleman Bartolomeo de Luci [1] [2 ] blood relative of the Swabian ruler. The Castle in the following years hosted kings and queens, including Frederick II of Swabia, Queen Eleonora d'Angiò and Queen Bianca of Navarre. The castle of Paternò and the territories subjected, in fact, were included in the so-called Royal Chamber which was established by Frederick III of Aragon as a wedding gift to his wife Eleonora d'Angiò and which was then inherited by the Queens that followed one another, until its abolition . After 1431 it belonged to the Speciale family and from 1456 until the end of feudalism it was owned by the viceregal Moncada family. Used as a prison in the eighteenth century, the process of decay and abandonment began, but since the end of the nineteenth century it has seen several restoration campaigns that have restored its ancient might. The building has a rectangular plan on three levels and reaches a height of 34 m. Originally the manor was crowned by a Ghibelline battlements (as can be seen in the seventeenth-century Drawing of the view of Paternò) of which only stumps remain today. The two-tone effect created between the dark color of the walls and the frames of the openings in white limestone is particularly interesting and pleasant. On the ground floor there are a series of service rooms and the chapel of S. Giovanni adorned with precious XNUMXth century frescoes. On the first floor, the large arms room is illuminated by a series of mullioned windows. On the top floor, four large rooms once used for the king's residence are disengaged from a room the size of the hall below and arranged transversely to it, closed on both sides by two large Gothic mullioned windows that open the gaze towards the Simeto and towards Etna.

Street View (if present)
Location
Rate it (1 to 5)
0.000
Location
Via dei Normanni
Send a notice to the publisher
Share / Share