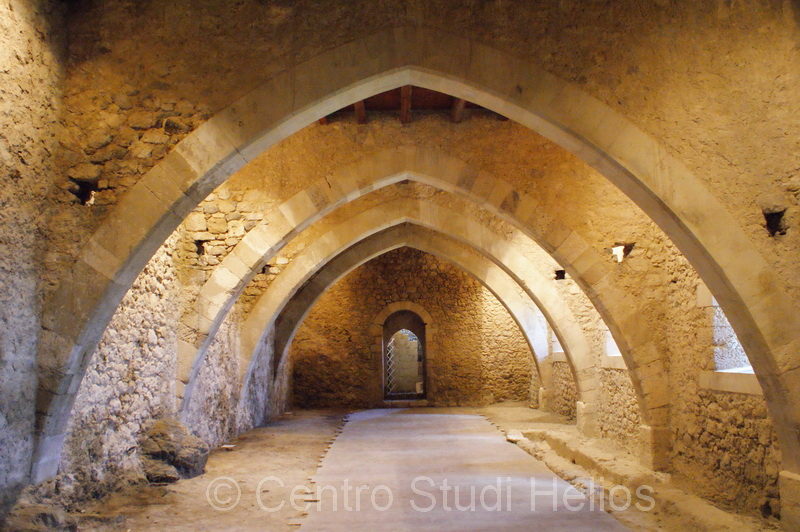 The Castle of Mussomeli is located in Contrada Castello about 2 km from Mussomeli, stands on a rock spur 80 meters high and surrounded by countryside and olive groves.

It was built by Manfredi III Chiaramonte in the second half of the fourteenth century after having obtained the Lordship of Castronovo and Mussomeli. The Castle is located on the south-west side, while it is accessible from the north-east side through a winding road on a steep escarpment. In the fifteenth century. the castle was enlarged with the construction of the great "hall of the barons" and the adjacent rooms. In 1391 Manfredi is succeeded by his cousin Andrea Chiaromonte who organizes   in the castle a meeting of Sicilian barons to resist the Aragonese, but the pact reached was not maintained by the barons and Andrea, abandoned by everyone, was arrested and sentenced to death by beheading on 1 June 1392 in Piazza Marina, in Palermo. Subsequently, several gentlemen succeeded each other: In 1392 with royal privilege Mussomeli is assigned to Guglielmo Raimondo Moncada and after a few years ai Counts of Prades. In the 1407 James de Pradessells the land of Mussomeli and the Castle a John Castellar. Between 1407 and 1451 the castle and the land of Mussomeli returned to the state property and in 1451 King Alfonso V granted John of Perapertusa, grandson of Castellar, the possibility of repurchasing the assets. The Perapertusa, however, not being able to fulfill the obligation to purchase passes the property to Federico Ventimiglia, with repurchase agreement. In 1467 Peter Field, Perapertusa's son-in-law, obtains from the viceroy the privilege of repurchasing the barony of Mussomeli, and the Campo will hold the property until 1549 when the barony is sold to don Cesare Lanza lord of Travia, who had cunningly centralized all the debts of the Campos in his own hands. With Cesare Lanza Mussomeli will be elected to the role of county. The Lanza will remain owners of the fiefdom until until the abolition of feudalism in 1812.

The name of Don Cesare Lanza and, entered the legend for the heinous murder of his daughter Donna Laura, Baroness of Carini. Don Cesare Lanza was succeeded by his son Don Ottavio Lanza and Centelles, count of Mussomeli and baron of Trabia, and his descendants who lived in the castle until 1603 and enriched the country with the Prince's palace, the characteristic Neptune Fountain and many other constructions. Later the castle was used as a prison and then abandoned. In 1909, on behalf of  Peter Lanza, Prince of Trabia, the castle was restored under the care of the architect Armò. A second restoration takes place at the end of the twentieth century. by the Superintendencies of Palermo, Agrigento and Caltanissetta. The Castle is currently open to visitors.

A first wall is placed at the base, to defend the access road. On the summit there is a second wall that encloses the residential part of the castle.

After climbing through the access road and after crossing a drawbridge, you enter through an arched door inside the first walls.

Continuing along the uphill path, you reach the second wall in which a further door of access to the castle opens, also ogival, with noble coats of arms at the top and at the sides; inside there is a large seven-sided polygonal courtyard overlooked by the residential areas of the castle, the chapel and the remains of the keep. After a short vestibule, through a molded ogival portal, you enter the so-called “Sala dei Baroni”, a large rectangular room in which two mullioned windows open. In this room in 1391 the meeting that Manfredi promoted for the independence of Sicily was held.

A stone staircase leads to an underlying room marked transversely by pointed arches. Adjacent to the "Sala dei Baroni", a triangular room leads into a succession of rooms, with ribbed cross vaults, in which mullioned windows open. From here you enter a series of adjacent rooms and through the stone stairs you go into the basement where the prisons, the soldiers' dormitories and a series of passages and tunnels that lead to the stands and back to the courtyard are located. In a corner of the courtyard directly above the soldiers' quarters there is a hole large enough to allow spears, swords and other bulky weapons to pass, which in case of defense would not have facilitated movement in the basement.

The rooms characterized by ribbed stone vaults, set on angular semi-pillars of polygonal shape, recall construction schemes typical of Swabian architecture, which is why a first nucleus of the castle built by late-Swabian workers could be identified here.

Going out into the internal courtyard, at a higher level, the remains of a construction with a rectangular plan with walls about 2 m thick, commonly defined as “male”, are visible, whose characteristics, according to Armò, are those typical of the donjon. The last body of the building, overlooking the internal courtyard, constitutes the chapel, characterized by an elegant stone portal, ogival, similar to the one that leads into the (Sala dei Baroni '. two ribbed cruises, resting on polygonal half-pillars, similar to the previous ones, surmounted by capitals with foliage; deep loopholes overlook the surrounding valley.

"Medieval Castles of Sicily - Guide to the Castle Itineraries of the Island published by the Sicilian Region Regional Center for the Inventory, Cataloging and Documentation of Cultural and Environmental Heritage" Taken from various sources, including:

Various legends are linked to the Castle

A legend tells the story of three princesses who were walled up alive in one of the rooms of the castle by their brother, Prince Federico, before leaving for the war. The war seems to have lasted so long that in the end, despite the abundant supply of food, the prince found his sisters dead and with their shoes in their mouths. It seems that since then, in the nights of full moon it is possible to hear the lamentations of the three girls who cry for the sad fate they have suffered and the screams of the brother who cries out to the moon all his anger for the remorse of having caused his death.

From this legend comes the saying "Tri Fimminie chi malu ci vinni" (Three women, what a bad end has happened to them)

Another legend tells of the ghost of a soldier in love with Manfredi's daughter. The soldier mad with love dared to challenge Manfredi who, in response, had him locked up in a tower to die of starvation. The soldier, however, preferred to throw himself down to escape the cruel condemnation.

Another ghost that would roam the palace is that of Laura Lanza, baroness of Carini, murdered in the castle of Carini by her father Cesare, because she was surprised with her alleged lover Ludovico Vernagallo di Montelepre. Cesare Lanza took refuge, driven by remorse for the killing of his daughter, in the castle of Mussomeli, not thinking, however, that the ghost of his daughter would follow him. The ghost is of a young and elegant woman, with perfect human features, dressed in sixteenth-century clothes, whose materialization is said to be so realistic that, if it were not for the clothing of another era, it could be mistaken for a truly living woman. Laura would wear a wide silk skirt and a bodice over which a finely embroidered shawl wraps. Anyone visiting the castle may encounter her wandering around the three largest rooms of the manor or on her way to the chapel, where she kneels and prays. The Castle was chosen in 1975 to film the RAI 4-part television drama “The bitter case of the Baroness of Carini” directed by Daniele D'Anza which is inspired by this legend.

A more recent story dates back to July 19, 1975 when the guardian of the castle, Pasquale Messina, witnessed for the first time the materialization of the ghost of Guiscard de la Portes, a young and handsome man who arrived in Sicily in 1392 following King Martin to put down some revolts. Guiscardo had left home the beautiful wife Esmeralda who at that time was pregnant with her first child and was killed on her way to Mussomeli Castle by the followers of Don Martinez, who hated him so much because he couldn't have Esmeralda. Instead of praying on the verge of death, Guiscardo cursed God who condemned him to wander the earth for a thousand years before finding peace. In addition to a little peace, the ghost also tries to meet his son whom he has never known