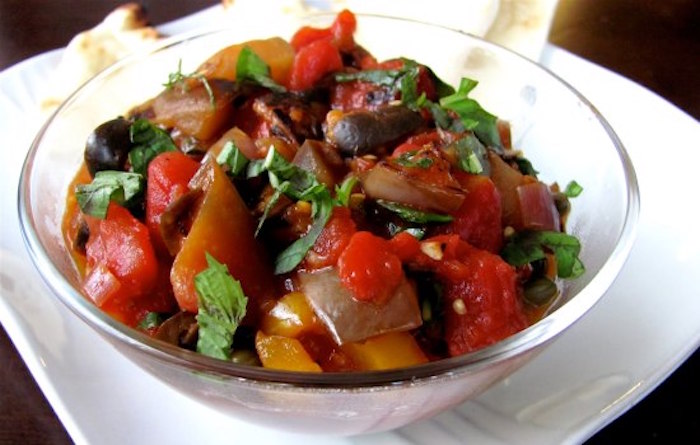 The caponata it is a typical Mediterranean dish, one of the products included in the national list of traditional agri-food products. It is a set of vegetables, mostly fried, with eggplant as the main ingredient.

The aubergine was introduced in Sicily by the Arabs (or perhaps later by the Carmelite friars who helped to spread it in the rest of Italy). His name was interpreted as unhealthy apple, from the Latin malum insanum, because it was believed to be toxic, to the point of producing madness. For this reason the aubergine was, at least until the sixteenth century, a vegetable used mainly by the lower-middle classes.

According to the Arab doctor Ibn Botlan (one of the authors of Tacuinum Sanitatis, the first natural science encyclopedia now kept at the Casanatense Library in Rome), the aubergine generated "melancholy moods";

Widespread throughout the Mediterranean, today it is generally used as a side dish or appetizer, but in the past it was a single dish, accompanied by bread. There are two types of caponata: one prepared exclusively with vegetables and one that also contains fish. The Sicilian caponata is basically the vegetarian one, also known as "poor man's caponata".

The etymology of the term "caponata" is uncertain, there are several theories, here are some:

a) the term derives from the "capones", called sailor biscuits, also called "crackers" consumed by Spanish sailors who used to give flavor and soften these biscuits with a sweet and sour sauce. These biscuits were substantially similar to those we know today as “freselle”, long-lasting slices of durum wheat or whole-grain bread toasted and much appreciated in Campania, Calabria and Puglia;

b) the term derives from the "capone", the name with which in some areas of Sicily it is called the 'lampuga', a fish with a prized meat. The sweet and sour fried capone is a traditional Sicilian recipe that recalls, in taste, the caponata for the presence of the sweet and sour sauce (vinegar plus honey, or vinegar plus sugar). The poor, unable to afford fish, replaced it with cheaper eggplants;

c) the term derives from the Latin "caupona", ie tavern or hostess, where this dish was always ready to be served and the adjective "cauponia", thus coming to mean "tavern food". It is however probable that in ancient times the caponata was very different from the one we know today, since the aubergine was not yet known.

Among the fish-based caponata, the caponata that Ippolito Cavalcanti reports in his book "Theoretical-practical cooking with corresponding answer", published in Naples in 1839, is quite well known. (At the bottom of the page the book by Cavalcanti, go to page 183 of the book to read the recipe.)

Clean the aubergines, cut them into cubes, salt them and keep them in a colander, under a weight for at least half an hour, in order to make them lose the bitter liquid, then dry them and fry them in abundant oil.

Cut into cubes and fry the potatoes as well.

In a large saucepan, fry the finely sliced ​​onions a little, then add the celery cut into small pieces, the chopped tomatoes, the olives and the capers; add salt and pepper and cook for 40 minutes, stirring often.

A few minutes before removing from the heat, add the sugar and vinegar. Serve cold.

There are many variations of the aubergine caponata, depending on the place which involve the use of pepper, potato, zucchini and many other vegetables such as carrots, spinach, cauliflower, thistles, chicory. In some places, breadcrumbs and anchovy fillets also come into play.

In some cases the toughest vegetables (celery, any carrots, etc.) are blanched for 2-3 minutes in boiling water before being added to the aubergines. Some variations include fresh tomato sauce instead of chopped tomatoes, in this way the caponata is more "colored" and the vegetables are less prominent.

here is another contribution:

Description of the processing and maturing methods: Depicciolatura of the aubergines, cut into irregular cubes and relative salting and frying. Preparation of the tomato sauce with boiled pieces of celery, desalted green olives, capers, white wine vinegar, sugar, fried onion.

Specific materials and equipment used for preparation and conditioning: No specific equipment.

Description of the processing, storage and maturing rooms: Gastronomy workshops and domestic environments.

Elements proving that the methodologies have been practiced in a homogeneous way and according to traditional rules for a period of not less than 25 years: New Sicilian - Italian dictionary by V. Mortillaro 1986. AA.VV. Great illustrated encyclopedia of Gastronomy Rider's Digest Milan 1990.