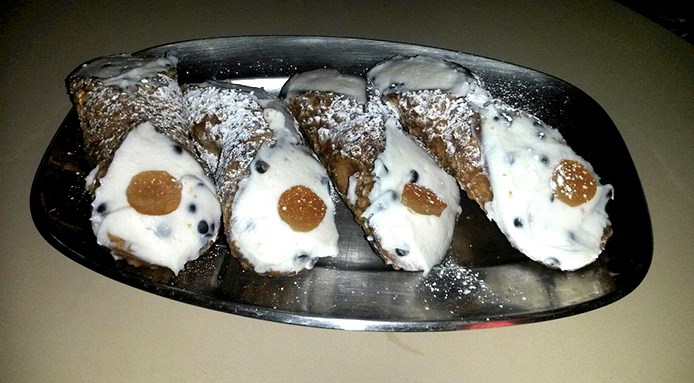 Type PAT : Fresh pasta and products from the bakery, biscuits, pastry and confectionery

Production area: Administrative territories of the Municipalities of Piana degli Albanesi and Santa Cristina Gela in the Province of Palermo.

Area of ​​production: Administrative territories of the Municipalities of Piana degli Albanesi and Santa Cristina Gela in the Province of Palermo.

Brief description of the product: Pastry product consisting of a brown wafer with a rippled surface with characteristic diffused bubbles, filled with ricotta cream obtained from ricotta cheese from sheep's milk raised in Sicily, honey and dark chocolate flakes (at least 70% cocoa).

Description of the processing and maturing methods: To obtain the Waffle (in Arbëreshë language: Shkorce, pron .: Scorc): the flour, of Sicilian Majorcan stone-milled soft wheat is mixed with Sicilian wine, then the lard is added, until a homogeneous and fragrant mixture is obtained which let it rest. The dough is then rolled out into a sheet of variable height of 3-5 mm .; with the traditional shape rhombuses are cut out, in the middle of which the barrel (cylinder) is placed.

The two shorter ends are superimposed on the cylinder and closed. The pastry is then fried in a pan with lard already at a temperature of about 250 ° C. Sheep's milk ricotta (in Arbëreshë language: gjize, pron .: ghiz) must be fresh, but it must have deposited as much whey as possible, it must be sieved and well blended after having reached pure honey. The chocolate flakes, cut with a knife by hand, should be added to the ricotta only before filling the wafer; it takes about 120 gr. of ricotta cream, obtained as above, to fill a wafer. The filling is traditionally done by hand and only before administration so as not to compromise the crunchiness of the wafer.

Specific materials and equipment used for preparation and conditioning: Traditional cutout rhombus shape created by local artisans; barrel (cylinder) on which the dough is wrapped before frying to give the typical shape of the cannolo; sieve to work the ricotta cream.

Description of the processing, storage and maturing rooms: The processing takes place in pastry shops, artisan workshops or kitchens depending on whether it is handcrafted or domestic.

Elements proving that the methodologies have been practiced in a homogeneous way and according to traditional rules for a period of not less than 25 years: There are several sources from the late 800th century that attest to the presence of the product in the Easter and Christmas tables of Albanophones. In the late '900 there is detail of commercial activities that refer to cannoli. Since the 60s, cannoli has become a traditional and typical dessert that is prepared all year round except for the hottest summer period. In the 70s there is a lot of documentation concerning cannoli in the archives of the Provincial Autonomous Company for Tourist Increment and, from the 80s and 90s, there are also substantial fiscal documents.