The SIC falls within the territory of the municipalities of Gela and Acate, where it covers a total area of ​​approximately 3666 hectares. It embraces the coastal stretch
south-east of the town of Gela, in addition to the plain of the interior, as well as the area of ​​Biviere and Macconi, already included in the scope of a nature reserve and considered
one of the most interesting biotopes of the central-southern side of Sicily. From the geomorphological point of view, the site presents a considerable variability, with the
aforementioned lake environment that develops close to wide dune strands, in turn made up of fine and quartz sands, sometimes interrupted by outcrops
rocks of various kinds, where most of the lithological types that characterize the Erei Mountains behind are represented. The Piana di Gela is predominantly
dominated by clayey-limestone formations dominated by alluvial deposits referable to the Quaternary (CATALANO & D'ARGENIO, 1982). Further north develops a
hilly system of evaporitic origin, with a more or less rugged morphology, while to the east of the Gela stream there are deposits of Pleistocene yellow sands
mixed with limestone, conglomerates and marly clays, which degrade towards the sea.On the basis of the bioclimatic classification according to Rivas-Martinez, the
the territory falls mainly within the thermo-Mediterranean zone, with a lower dry shadow type, tending towards the upper towards the interior. The landscape
vegetation of the areas above is considerably affected by the intense uses of the past; in the Piana area it is largely dominated by crops, in particular
arable land. In proximity to the coast, greenhouse cultivation takes on considerable importance, which goes close to the Biviere

The area in question is part of the RAMSAR CONVENTION, identified in 1987 for an area of ​​297 hectares. Subsequent studies have highlighted that
the entire Gulf and the Piana di Gela is a fundamental ecological unit for the migration of water birds and falls within the parameters for identifying sites
RAMSAR. The entire Piana di Gela, including a marine belt, was also defined as IBA (Important bird Areas) by a study carried out by LIPU
Birdlife Italia, commissioned by the Ministry of the Environment. In Italy, out of 200 IBAs, the one in question (No. 166 "Biviere and Piana di Gela") is in eighth place for
conservation importance. The area also has a high floristic, phytocenotic and landscape importance, in particular for the dune system of the Macconi
and the Biviere di Gela. The list reported in section 3.3 refers to the endemic, rare or phytogeographical entities of significant phytogeographic interest (D). The environment
humid is an area of ​​considerable interest for wintering, nesting and resting of various species of migratory and sedentary fauna. The consistency
of these populations, in the national field, is of strategic importance for conservation. The Gulf acts as a funnel favoring the crossing of Sicily for
aquatic avifauna from North Africa, especially in spring. Only between February and April the ducks that arrive on average on the gulf are>
45.000 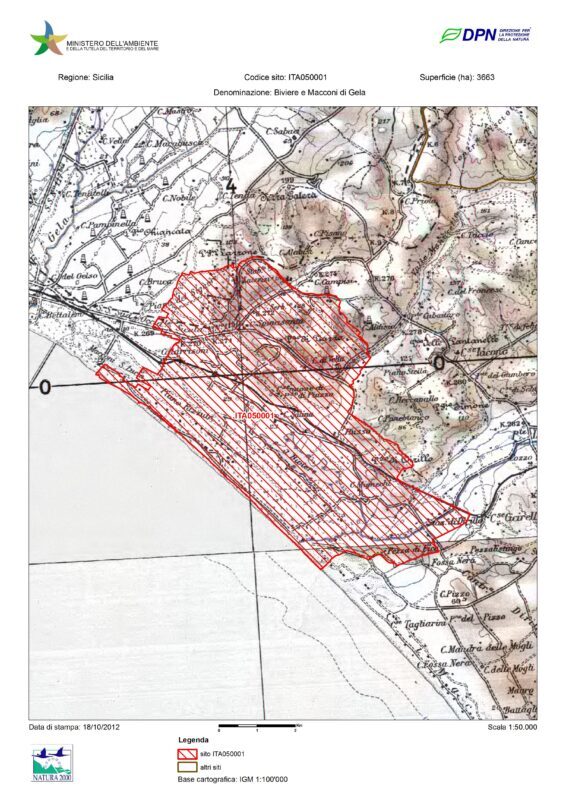