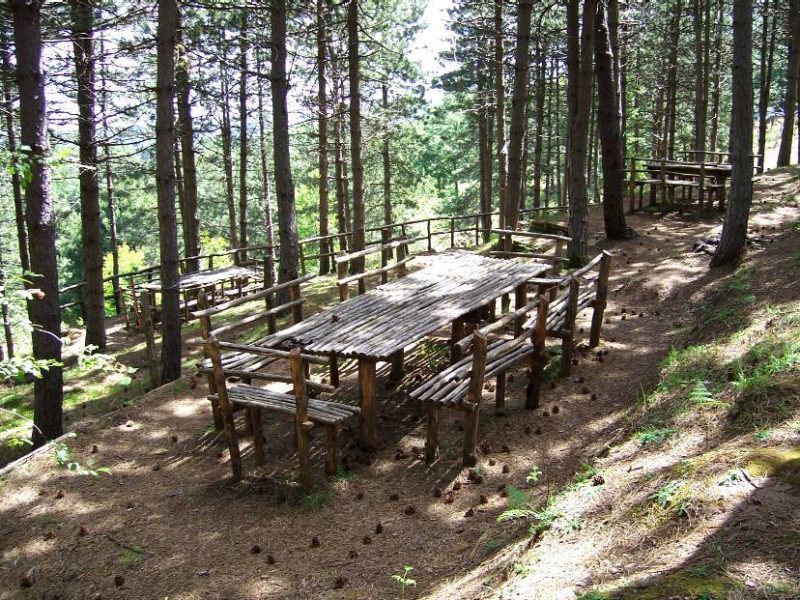 In the territory of the municipality of Tortorici, rich in different natural environments, a small equipped area has been created in the areas owned by the Forestry Company as a tangible symbol of a state-owned wooded reality destined for public use. Along the route that leads to Tortorici, starting from the SS 113 one has the opportunity to observe now the citrus groves, now the hazel groves and then gradually chestnuts, turkey oaks and beeches, each species representative of a different altitude range. To reach the equipped area, the destination of our journey, starting from Tortorici, continue in the direction of Floresta. After about 10 km of the provincial artery, take the paved road on the right for Portella Nitta and then follow it to Portella Castagnera, better known as the “Case Abbadessa locality”. A dense forest of old black pine trees, about 1.200 meters above sea level, is a different note in the surrounding vegetation context, consisting mainly of Turkey oaks and, higher up, beech trees. The pine forest is the legacy of an ancient woodland plant previously built in grazing lands obtained in turn with deforestation works of the primitive arboreal vegetation.
In this environmental context, the equipped area of ​​Cerasia was created consisting of only a few wooden benches and tables, access to which is possible by means of a special ladder that allows you to easily overcome the barbed wire fence that represents the closure of the entire wooded area. . Interesting is the presence in the surrounding areas of rare and interesting plants such as the mountain maple and the holly, here vegetating spontaneously in a compact bushy form.
The area is reachable by a good asphalted road, so that on holidays it becomes a very popular destination for excursions and trips into the woods by the many nature lovers. The presence of scouts and school groups on educational trips is not uncommon, mostly coming from neighboring municipalities and from the province of Catania.
The wood with its heterogeneous floristic cortege and the pure air of the place are the visiting card of this mountainous territory, antechamber of the Nebrodi Park. Tortorici is one of the municipalities of the Park.

Provincial Office of the Messina Company

To describe the symbols, place the mouse over the symbol itself.

The information on the equipped state-owned areas has as its main source the website of the Regional Forestry Department of Sicily (continuously updated) to which is added a very interesting brochure entitled "The State Equipped Areas in Sicily" of the same department published in 1999 with the Editorial Coordination of the 8th Group - Promotion, Development and Research, editors Agostino Gatto and Valeria Restuccia. Further information was obtained from direct access to the areas and from interviews with experts and operators in the sector.

For official information and updates to the lists, see the pages of the site of the Sicily region - Department of the Regional State Forestry Company

Click to see on Google Maps
82 Contrada Lembo, Tortorici, ME
Rate it (1 to 5)
4.002
Send a notice to the publisher
[contact-form-7 id="18385"]
Deactivate the Youzify Membership System to use the theme's login form here.