Cults and divinities
Sicily
Ratings, Comments and User Experiences
Rate it (1 to 5)
4.001

Apollo is the son of Zeus and Latona and his cult is closely related to that of Artemis, whose twin brother he is considered.

It is said that Latona, seduced by Zeus and pregnant with Artemide e Apollo, had to escape the wrath of the jealous Era, wife of Zeus and for this reason she was forced to wander around the world, chased by Python, a monstrous snake born from the earth and under the command of Hera, in search of a safe place to give birth. Finally he found a wandering island, where he gave birth to Artemis and Apollo. The island, which was given the name of Delos, then became stable thanks to Poseidon who, taking pity on poor Latona, anchored it to the bottom of the sea with mighty columns.

The characteristics common to Artemis and Apollo are more than one: both are equipped with bow and skilled hunters and their cult is linked to aspects of nature. Apollo is identified with the sun, therefore acquires characteristics of brightness and for this reason he is considered a god of light as well as of truth. Artemis, on the other hand, has a more nocturnal role and is, in fact, identified with the moon. 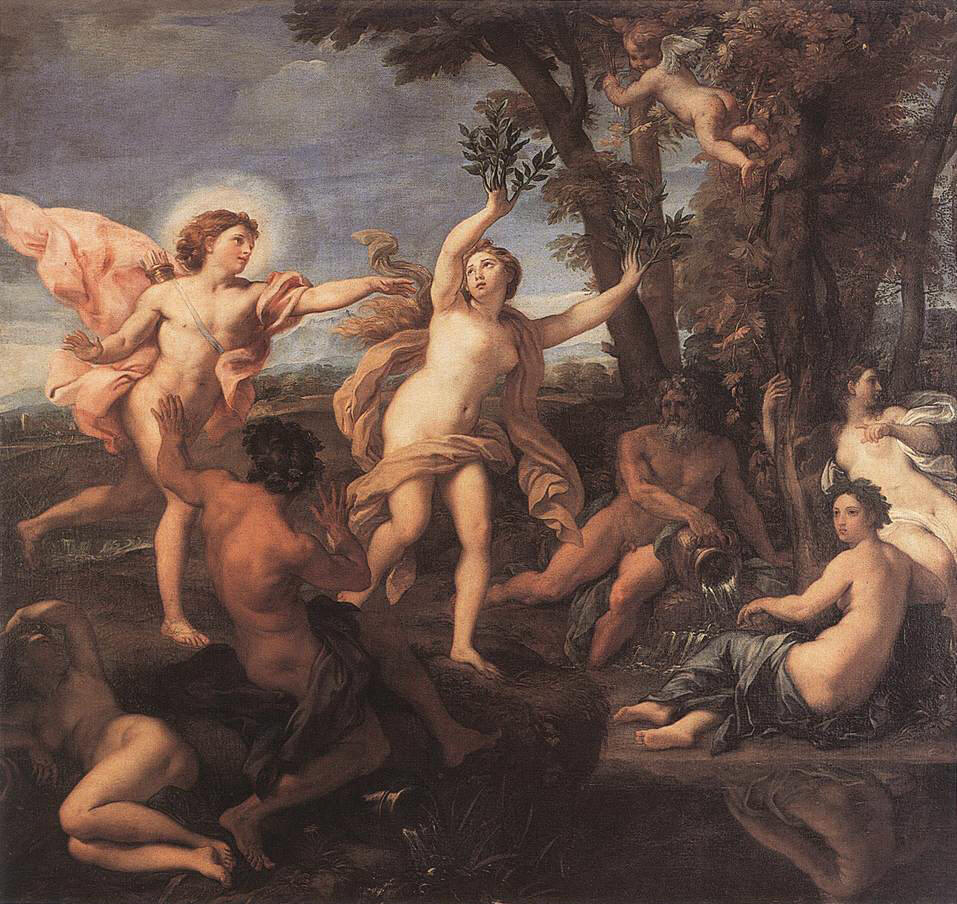 One of Apollo's first actions was to kill, with one of his infallible arrows, the python who molested his mother and for this action he earned the nickname of Pizio. The killing, by the solar Apollo, of the serpent born from the earth probably symbolizes the victory by the sunlight over the darkness of the night. God of music and divination, Apollo has, among his tasks, the exercise of prophecy. He communicated his prophecies to mortals thanks to oracles, the most famous of which was based in Delphi, a place of Phocis, located on the southern slope of Mount Parnassus, in Greece. 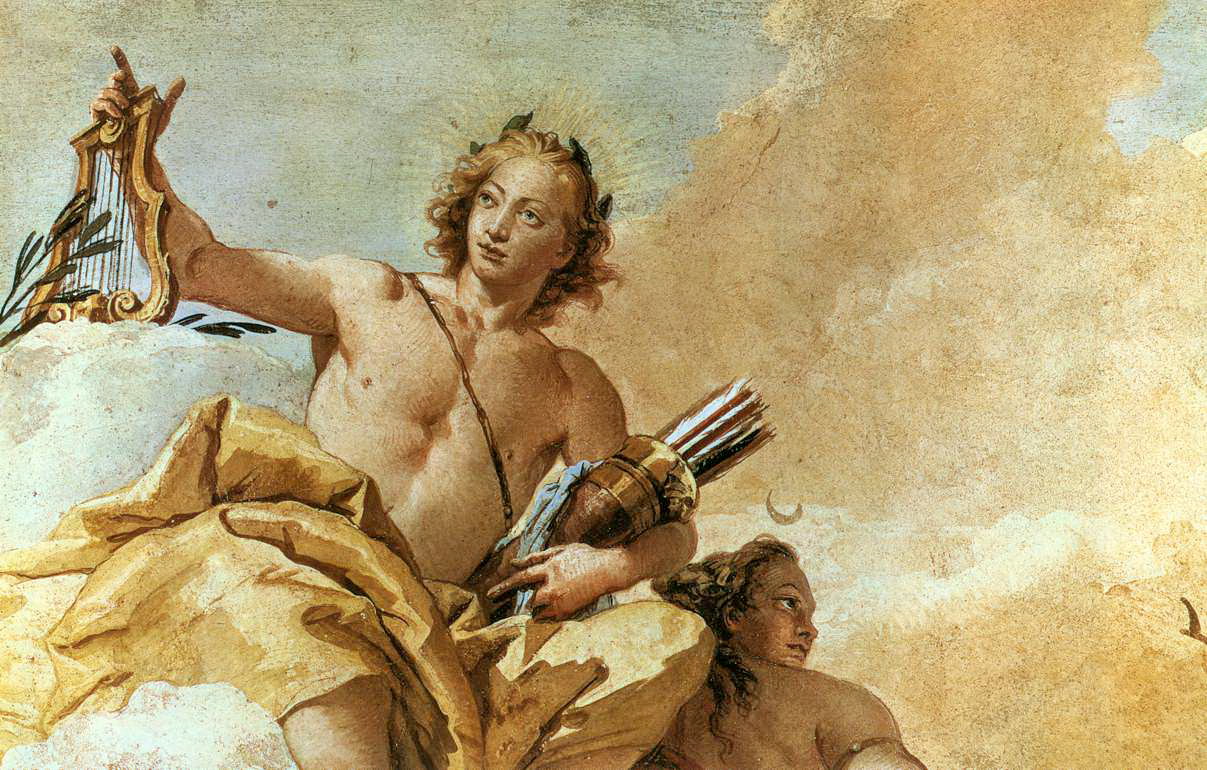 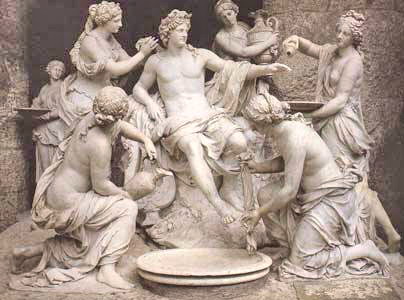 In Delphi there was a famous sanctuary, seat of the oracle of Apollo, revered for centuries not only by the Greeks but also by other peoples who took possession of the place, including the Macedonians and the Romans. The oracle was suppressed in 390 AD by the emperor Theodosius. In an underground part of the temple stood the Pythia, priestess of Apollo, who in ecstasy, seated on a tripod, spoke with obscure words and unrelated phrases that the priests noted down and arranged later in complete sentences. The oracle, in addition to predicting the future, gave advice and help. The departure of the colonists for new territories was often preceded by a trip to Delphi, where the oracle was consulted to give indications on the ecista of the expedition, that is, on the leader who was to lead the colony.

In the temple, a series of gold writings on the walls invited guests to reflect. They are worth remembering:

"have measure in everything"

and the authors of these sentences are also attributed the following:

"only he who cannot bear disgrace is unfortunate" 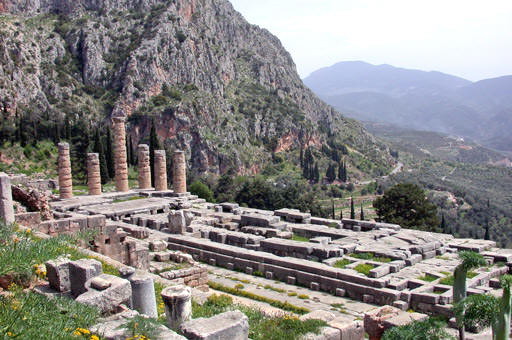 Temple of Apollo in Delphi

Temple of Apollo in Delphi (reconstruction)

These phrases denote great wisdom and profound life experience. It should therefore not be surprising if, beyond the religious sentiment, the sanctuary was frequented for centuries.

Apollo is also a pastoral god and he himself is sometimes seen as a shepherd. The oxen stolen by God belong to him Hermes, eventually traded for the Lira.

Apollo is depicted as a handsome young man, his attributes are the bow and the lyre while his head is sometimes encircled by a laurel wreath.

Among the animals sacred to him are the wolf and, as for Artemis, also the deer and the roe deer.

His close connection with nature is highlighted by the stories of his loves, both female and male, which are transformed into flowers and trees. He loved the nymph unrequited Daphne, daughter of the river god Peneus. In fleeing from Apollo, Daphne shortly before being reached asked her father for help who, to save her, transformed her into a laurel (in Greek daphne = laurel). Apollo was also in love with the young man Giacinto, but one day, playing the discus throw, he killed him without wanting to; deeply saddened, the god transformed his beloved friend into a new flower: the "hyacinth".

In this last story it is possible to find the fact that the sun's rays can protect the flowers from the cold, but it is also true that the excessive heat emitted by them can kill them.

Another love of Apollo was the young man Cyparissus. He had as a playmate a tamed sacred deer, but one summer day, while the deer was sleeping in the shade, Cyparissus, throwing a javelin, killed him inadvertently. The desperate young man expressed to the gods the desire to die and that his tears would fall forever. It was thus transformed into cypress, the tree of sadness.

Like Zeus, Apollo had various names that distinguish the various shades of his cult, the most famous of which was Phoebus (the pure), but there was also Pythian Apollo (having killed Python), Apollo Lyceum (victor of the wolves), Apollo Sminteo (exterminator of mice destroying the crop), Apollo Parnopius (destroyer of locusts), Apollo Targello (from the month of May, which in Greek is Thargelios, indicating the solar heat which in May ripens the crops) and others.

There were many feasts in honor of Apollo, among the most famous were the Pythian games, in honor of Apollo Pizio. These took place every four years, and precisely the third year after each Olympiad, and consisted of musical, poetic and, later, gymnastic competitions. The prize for the winners was a laurel wreath, the plant sacred to Apollo.

Another notable party was that of Delie, during which sacrifices were made in honor of Apollo, gymnastic competitions were held and feasted. During the Delie the judicial truce was instituted for which all capital executions were suspended.

Other parties of the same magnitude as the Delias were the Carnee, celebrated in honor of Apollo Carneo, lasted nine days, with gymnastic competitions, joyful outings and sacrifices of kids.

In Sicily the cult of Apollo was quite widespread. In Naxos, where the first Chalcidean Ionians landed, the cult took on a political significance and the god was seen as the protector of colonists and new settlements.

In other cities the cult took on a typically pastoral typology, while in still others it was related to that of Asclepius, god of medicine. To Agrigento a statue of Apollo, the work of the famous Greek statuary Mirone (2th century BC) and located in the temple of Asclepius, was stolen by the inevitable Verre [XNUMX], always present where there was some work of art to steal.

Apollo was also considered protector of medicine to SIRACUSA and Selinunte. In the latter city a coin was found that underlines the relationship between the cult of Apollo and that of Artemis, in fact, the two appear together on a chariot. The coin, a tetradrachm from the XNUMXth century. BC, it is now preserved in the National Archaeological Museum of Naples. Finally, news about his cult can be found in the cities of Adrano, Etna, Agirio, Amestrato [3], Assoro [4], Caleacte, Catania, Centuripe, Lentini, Marsala, Menai, Palermo, Tindari and Messina.

Of the temples of the Acropolis of Selinunte, the oldest and most imposing of the Doric temples of the city named with the letter C was dedicated to Apollo. It was begun in 560 BC, measuring 63,7 x 24 m [5] and in it a metope was found, now preserved in the National Archaeological Museum of Palermo, depicting Apollo. The name of Apollo also appears in the large “Selinuntina table” which, as the inscriptions themselves recall, was placed in his temple. A Piazza Armerina, in the famous late antique villa of Casale, a statue of Apollo and part of a fresco representing two metamorphosis scenes linked to his myth was found: that of Daphne in laurel and of Cyparissus in cypress [6]. A SIRACUSA, on the island of Ortigia, and precisely in Largo XXV Luglio, the remains of the temple of Apollo are still visible. This temple was, in the past, attributed to the cult of Artemis, but an inscription engraved on one of the steps would confirm, instead, that it was dedicated to Apollo. 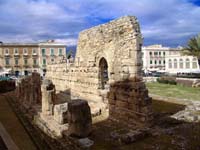 The temple measures m.58,10 x 24,50 [7] and the construction can be traced back to the beginning of the sixth century. BC Another Sanctuary, dedicated to Apollo Temenite, was discovered, from excavations begun in 1953, near the theater of Syracuse; the altar was built several times and moved as the construction of the theater was enlarged and the oldest traces date back to the end of the XNUMXth century. B.C. 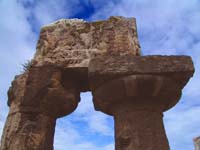 The current civic coat of arms of the city of Marsala, denotes how the cult of Apollo must certainly have been present in that ancient city Lillibeo, where in a cave there was the headquarters of the Sibyl of Lillibeo, prophetess of Apollo. Above the cave, in the same place where a temple dedicated to Apollo probably existed [8], the church of S. Giovanni Battista was erected in the sixteenth century, the statue of which, located inside the cave, would rest on a ancient macaw of Apollo. Civic coat of arms of Marsala

[3] The city of Amestrato is probably to be identified with the current Mistretta, at 20

[4] The city of Assoro is probably to be identified with the current village of Assoro, not far from Leonforte in the Province of Enna.