The origins of the Myth

Identified with the Roman Jupiter, he was considered the god of light, the bright sky and lightning, the supreme and omnipotent god of the Greeks. His omnipotence did not take him away, in any case, from the will of the Moira, the goddesses of destiny, even if destiny itself is, in some way, seen as an emanation of his wishes. In fact, mythology attributes to him among the many loves also the one with Themes, one of the Titanides, from which he had the Moira who are responsible for the Destiny of which Zeus was the guarantor.

Zeus's task was to maintain harmony in the world; he was considered the protector of civil life and hospitality, he gave punishments for transgressors even if they were the Olympians themselves, who still had to submit to his provisions. Zeus, in fact, thundered Asclepius when he discovered that he made the dead resurrect with the risk of endangering the order of the world.

While knowing fate, Zeus did not exercise prophecy, a task entrusted to others, including Apollo.

But the "guarantor of the destiny of the world", careful that the whims of gods and men did not cause disturbances in the cosmic harmony, was not immune from defects. His amorous whims, for example, made his love life very troubled. The multiplicity of love affairs attributed to Zeus could be linked to the evolution of the religion of the pre-Greek populations. Initially, there were different nuclei of populations, each of which had its own supreme divinity which could be, male (in this case accompanied by a female divinity), in the case of a matriarchal organization, it could also be female (in this case it was the supreme goddess to be flanked by a male deity). It is probable that all the supreme male divinities have been incorporated into a single divinity, thus aggregating the pre-existing ones into a single cult and also inheriting the relationship of union with the female divinities flanked by the ancient gods.

Another reason for the proliferation of love affairs and the innumerable sons of Zeus, could be linked to the desire of many families to build a family tree in which none other than the supreme god appeared among the relatives. This was particularly useful when there were doubts about the legitimacy. Yet another reason may be linked to the mythological language that presents, in the key of amorous union, phenomena drawn from nature, so, for example, the union between Zeus and Demeter could symbolize the sky (Zeus) which, thanks to its rains , makes the earth fertile (Demeter).

The tables below show only some of the loves of Zeus and the children he had.

Son of the Titan Cronos and Rhea, Zeus waged a war against his father and the Titans for supreme power. In the fight he was helped by the brothers he had brought back to life and by the Cyclops whom he freed from the underground, where Cronos had imprisoned them. After 10 years of hard struggle the Olympic gods succeeded in chasing Cronos and the Titans from Heaven. In the division of power, Zeus obtained Heaven and domination over the entire Universe, Poseidon the Sea, and Hades (Pluto) obtained the underworld.

Zeus is represented in various attitudes, almost always accompanied by the thunderbolt, which he holds in his hand, to symbolize his power over lightning, which he used to punish mortal beings and gods when chance required it.

The cult of Zeus varied according to places, cultural influences and pre-existing cults, and consequently also the attributes assigned to him varied, thus becoming Zeus Olympus, Zeus Eleuterio, Zeus Atabirio, Zeus Polieo and so on.

In Athens in honor of Zeus Polieo (protector of the city) the rite of Bufonias: a priest called "Bufono" ("bovicide") killed, with an ax, a bull which had been made to eat grains of barley mixed with wheat, scattered on the altar of Zeus Polieo. The priest, after killing the bull, threw away the ax and fled as if frightened for what he had done, while the ax used was tried and sentenced to be thrown into the sea [1]. The rite, very ancient, was linked to primitive agrarian cults and probably, in its most ancient form, included the killer of the bull as a sacrificial victim.

The main Greek divinity could not be missing in Sicily: in Syracuse there was more than one temple and a grandiose statue in honor of Zeus Eleuterio which was raised by the population after the removal of Trasibulo, as told by Diodorus (lib XI.72). On that occasion, festivals were established in honor of Zeus in which 450 bulls were sacrificed for the banquet of the original citizens [2].

News on the cult of Zeus can also be found in Camarina and Agrigento where there was a temple considered one of the largest on the island and described in detail by Diodorus Siculus. It is still considered the largest Doric temple in the West. Its construction began in 480 BC, after the battle of Imera, but it was not completed, as told by Diodorus himself (lib XIII.82). The temple measured m. 112,70 x 56,30 with a height that must have exceeded 15 meters and a total area of ​​6340 square meters [3]. 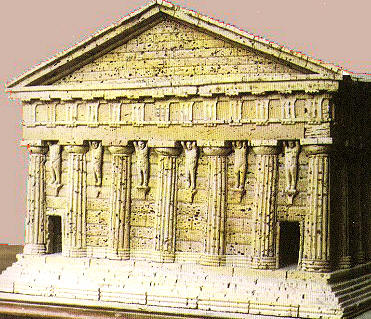 Reconstruction of the Temple of Zeus in Agrigento

Agrigento: Remains of the temple of Zeus - Copy of a Telamon used to support the temple (original in the National Museum of Agrigento)

Also in Agrigento there was the temple of Zeus Polieo, on whose ruins it is said that a Christian cathedral was built.

In Selinunte there was a temple dedicated to Zeus Agraios [4], while a sanctuary dedicated to Zeus Melichios (Zeus sweet as honey) was found in the place called "Gaggera hill" [5]. The name of Zeus appears in the "great Selinuntina table", where the gods are thanked after a victory.

A Zeus Etnaeus was also revered on the slopes of Etna and, finally, traces of this cult are also found ad Alesa, Acre, Imera [6], Palermo, and Messina .

[2] In the sense that in these banquets the mercenaries who had had citizenship under the tyranny of Gelone were excluded.

[6] Greek colony founded by the Chalcidians of Messina in the seventh century. BC and definitively destroyed by the Carthaginians in 409 BC