Hermes, identified by the Romans with Mercury, was considered the son of Zeus and Maia. He was often seen as the interpreter of vol

divine integrity, but above all he was the protector of trade and theft. He himself, just born, had been the author of a clever theft against his brother Apollo. Born in a cave, on Mount Chileans, south of Arcadia, he managed to free himself from the bandages that bandaged him and went to Thessaly, where his brother Apollo was who was a cowherd. Taking advantage of his brother's momentary absence, he stole some of the animals from him and took them across all of Greece to Pylos, where he sacrificed two oxen. Hiding the rest of the animals, he returned to the cave where he was born. At the entrance to the cave he found a turtle, took it, emptied it and, with the intestines of the sacrificed oxen, built the lyre. His dexterity had been witnessed by an old man named Batto who told everything to Apollo who went to Mount Chileans to complain to Maia about the robberies of his son. Maia then showed Apollo her infant brother and asked him how she could accuse such a small child of such feats. Apollo asked, at this point, the intervention of Zeus, who, knowing the truth, ordered the child to return the animals. Apollo, meanwhile, had been able to see the lyre and hear the sounds that Hermes had managed to make it emit. Falling in love with the instrument, he asked and obtained from Hermes to exchange it with his oxen. 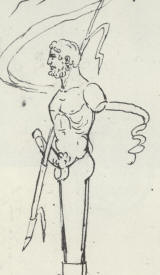 Hermes, rectangular pillars whose part were dedicated to Hermes along the streets and on the crossroads 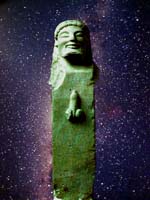 upper was modeled with a bust representing him, often endowed with very conspicuous virile organs. It is probable, in fact, that the column was in the beginning a phallic symbol, but its purpose was to indicate the right way to travelers; and in fact, among the various tasks attributed to Hermes, there was also that of being the protector of travelers on the roads.

Hermes was often represented with a large hat, with winged shoes that made him faster than the wind and with the caduceus [1], symbol of his functions as divine herald.

According to Diodorus Siculus (lib. I.16), thanks to Hermes the alphabet was invented; moreover, he was the first to establish the discipline of the fight and taught the Greeks the faculty of expressing their thoughts (hermenia) and it is for this reason that he was given the name of Hermes. Again according to Diodorus, it was Hermes, and not Athena, who discovered the olive tree.

In addition to the lyre, Hermes is also credited with inventing the syringe or pan flute.

In Sicily he is seen above all as the father of Daphni and his cult is related to that of Demeter and Persephone [2].

The news regarding the cult of Hermes are few: it is spoken of in the centers of Akray, Agrigento, Palermo, Enna, Menai [3] and Alunzio [4].

A Morgantina the cult of Hermes was probably connected to those of Gaea and Pluto. The three deities, in fact, were venerated in the same sanctuary whose remains are still visible to the east of the ancient theater. The attribution of the three divinities to the sanctuary is justified by the discovery of some lead sheets on which their names are reported.

The cult of Hermes was also present in SIRACUSA, where in his honor, the Hermes, festivals during which competitions and wrestling contests were held between children. In fact, Hermes was considered to be the guardian and protector of youth and such festivals took place in many Greek cities.

The existence of the cult a Tindari [5] would be testified by Cicero who narrates that the governor Verre stole a statue of Mercury from the city. After the conquest of Carthage, Scipio Publius donated a statue of Mercury to the town of Tindari but Verre asked that it be removed and given to him: the senate of the city, however, opposed it. After several attempts, Verre summoned Sopatro, the president of the local senate to Syracuse, and upon yet another refusal to hand over the statue, he reacted by making him strip naked and having him tied to a statue in the public square. Only when the senate of Tindari conceded to remove the statue of Mercury, Verre freed the poor Sopatro, who had almost died of frostbite.

(If you want to arrive healthy, don't forget the Paternostro di S. Giuliano).

The paternostro consists of a prayer addressed to St. Julian by those who are about to embark on a journey that may present dangers [6].

[1] The caduceus was a club or club used by heralds and ambassadors in times of war. In mythology it was the rod surmounted by two small wings, with two snake figures entwined to form an arch with the highest part of the body. The caduceus later became the emblem of pharmacists.

[3] Also known as Menaion, probably corresponding to the current Mineo.

[4] Alunzio, also known by the name of Haluntium, was probably of Sican origin; it must not have been very far from Capo D'orlando, near the present town of San Marco di Alunzio.

[5] The city of Tindari stood on the northwestern coast of the island about 60 km from Messina, on a promontory 230 meters high.