Hera (Hera), identified with the Roman Juno, was considered the queen of the goddesses, the mistress of all Olympus, daughter of Cronos and Rhea, sister and wife of Zeus.

It is part of the syncretic nucleus of the "Great Mothers" with Gaia (Gea), Cybele, Demeter and the Egyptian Isis.

There are several variants on Hera's wedding with Zeus: one tells that the wedding was celebrated in great secrecy without the knowledge of Rhea and Cronos; another tells, however, that they were celebrated in the palace of Zeus with the participation of all the gods at the great wedding party; a further variant, finally, He was reluctant to marry Zeus but the latter, after having unleashed a storm and transformed into a cuckoo, pretending to be frightened and numb, introduces himself to Hera who, taking pity on the poor soaked bird, hides him under his clothes to warm it up. Zeus, with this subterfuge, manages to possess Hera. Only after this fact (or rather wrongdoing) are the reparatory wedding celebrated.

Hera was considered the protector of weddings and family and her name was invoked to assist mothers during childbirth. The animal sacred to her was the peacock, her favorite plants were the pomegranate and the lily.

Era had a vindictive nature, towards rivals and their children. For example, Heracles, better known as Hercules, owed the famous "twelve labors" to his wrath. His vengeful fury is also evident in a legend in which it is said that the Trojans paid the consequences of a beauty contest whose result was not liked by the goddess. During the wedding of Thetis and Peleus, Eris (the goddess of discord) threw a golden apple that would be given to whoever, among Aphrodite, Athena and Hera, was considered the most beautiful. The Trojan Paris was appointed judge of the dispute to whom each of the goddesses promised something in the event of victory. Hera promised dominance over all of Asia, Athena promised wisdom and victory in all fights and Aphrodite the love of Helen of Sparta. Paris chose Aphrodite, thus unleashing the wrath of the touchy Era.

The cult of Hera was not flourishing in Sicily. In fact, we speak of the goddess only in Syracuse, Acre, Imera, Selinunte and Agrigento [1]. Of the three temples of Selinunte, designated with the letters E, F, and G, the first is the one dedicated to Era [2].

An extra-urban sanctuary attributed to this divinity was found near Gela, in the locality of Madonna dell'Alemanna.

In Agrigento, in the famous hill of temples, a temple of the fifth century. BC is known as the temple of Juno [3].

It is not proven, however, that this cult was widespread on the Erei Mountains, considered, by their name, sacred to the goddess; in fact, the hypothetical link between the goddess and the city of Ibla Erea, whose name was due to the fact that, among the Ible of Sicily, it was the one located in the Erei mountains, is still to be demonstrated.

The supposed relationship between Era and the Erei mountains probably favored the birth of a local tradition, mentioned by Ciaceri [4], according to which Donnalucata, a seaside village not far from Scicli (in the province of Ragusa), took its name from temple of Iuno Lucetia (Giunone Lacinia). It is probable, however, that the origin of the name is Arabic, and that it derives from 'ayn al awqat '  that would mean 'source of hours'. The antefix the same was translated intowoman as it happened for another locality near Ragusa and that is Donnafugata, which would take its name from 'ayn as jafat ' (source of health) [5]. 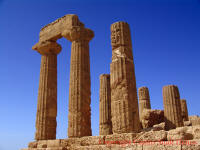