The Goddess, identified with the Roman Minerva, is the daughter of Zeus and Meti. Zeus devoured poor Meti when she was pregnant with Athena, recommended by Uranus e Gaia who revealed to him that if Meti gave birth to a daughter, a son would then be born who would take away the command of heaven. Zeus took on the task of carrying out the gestation himself. When it came time for the birth, she got help from Hephaestus, who carried out what could be called a very particular caesarean section: in fact, with a well-aimed blow of the ax, he made Athena come out of Zeus's head. The goddess, who was already an adult and well armed, uttered a war cry as soon as she was born that rang out across the earth.

Athena is considered the goddess of war but, unlike Ares, violent and bloodthirsty, it demands from its proteges (including Ulysses, Hercules, Achilles and Jason) not brute physical strength but actions, the result of reflections and tactical reasoning. It is no coincidence that in the Greek world she is also considered the goddess of reason. The mother's name, Meti, in fact, can be translated with the word "sense". The fact that it is Athena who faces and beats Ares emphasizes that reflection and reason often prevail over brute strength.

Athena is also the protector of weavers and embroiderers, but her role as a warrior goddess is the prevailing one. She is represented with a helmet on her head, armed with a spear and shield and dressed with the aegis (a kind of goat skin cuirass). On her shield the goddess placed the head of Medusa, the gorgon who had the power to turn into stone anyone who dared to look her in the eyes and who was killed by Perseus.

The epithets of Athena were innumerable, but the most widespread was that of Pallas (the one who throws the auction). With this epithet, the goddess assumed characteristics similar to those of Demeter, being also considered the protector of fields and agriculture. In Athens her cult was second only to that of Zeus, and to her the Parthenon.

Athena is credited with the invention of olive oil and also the introduction of the olive tree in Greece. His favorite animal is the owl. It is no coincidence that what characterizes the owl, compared to other animals, is precisely the large and shining eye; and it is, in fact, in the blue eyes of the owl that one of the characteristics of Athena is reflected, considered the goddess of clarity and called "goddess with blue eyes" that is "goddess with blue eyes". In the Greek language, the words owl and blue have a similar sound (glaux = owl, glaucos = light blue). Athenian coin with the owl

Athena remained a virgin and, however, a son is attributed to her, which she would have had from Hephaestus in the following way: she had gone to get weapons from Hephaestus, an expert blacksmith who used volcanoes as workshops. The latter, abandoned by Aphrodite after having discovered the affair with Ares, fell in love with Athena; the goddess, however, did not want to know about the ugly Hephaestus who, by now decided to possess her, despite being lame, began to chase her, reached her and took her in his arms. But so much was his desire that, perhaps suffering from premature ejaculation, he wet one leg of the goddess with his semen. Athena, a little disgusted, dried herself with some wool which she then threw on the ground soaked in the seed of Hephaestus. From the earth, fertilized in such an unromantic way, Erichthonius was born that the goddess considered her son, locked him in a chest, under the care of a snake, and entrusted him to Aglauro, the daughter of the king of Athens. 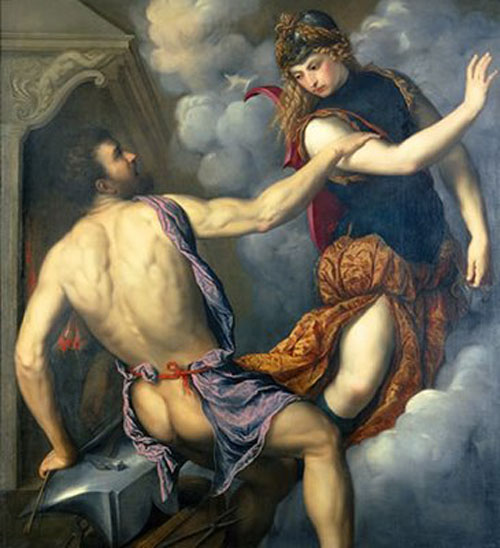 There were many celebrations in honor of the goddess. Particularly interesting were the Panatenèe and they took place in Athens every year, replaced every four years by the great Panathenae. It is said that these festivals were established by Erichthonius, the son of Athena. Various sporting activities took place during the celebrations. A very special exercise consisted of getting off and on quickly on a moving chariot wearing armor. At the end of the feast there was a night ceremony in which, with a solemn procession towards the Acropolis, a very precious female dress was offered to Athena. Another holiday, celebrated in Athens was called Arreforie, dedicated to Athena Pallas. During its development, the priestess of Athena gave sacred and mysterious objects to girls of noble families called "Arrefore" ("bearers of objects that cannot be talked about"), who had the task of carrying them, late at night, in the basement of Aphrodite of the gardens [1]. Perhaps the sacred objects were symbols of fecundity in the shape of genitals. This could be deduced from the fact that one of the ceremonies that took place during the Thesmophoria dedicated to Demeter and Persephone and to which only married women participated, it consisted precisely in bringing in procession to the goddesses some pasta objects in the shape of genitals, as a wish for the fertility of the fields.

Also in Athens the Plintèrie, purification festivals in which the simulacrum of the goddess was washed in the sea.

The Cult in Sicily

In Sicily the name of Athena is also linked to Enceladus. This was one of the Giants who participated in the so-called Gigantomachia, the battle between the Giants and the Olympians. During the battle Enceladus tried to escape but the goddess Athena buried him throwing him over the island of Sicily, a place from which he can no longer escape, the myth tells that the volcanic activity of Etna originated from the fiery breath of Enceladus, while the earth tremors during earthquakes, from its rolling under the mountain due to injuries (myth similar to that of Tifeo) Agrigento
The cult of Athena was widespread in Sicily. In Agrigento there was a temple dedicated to her on top of the acropolis, near that of Zeus where the Christian church of Santa Maria dei Greci [2]. Indeed, the current church incorporates the remains of a Doric temple from 480-460 BC, perhaps to be identified with the Athenaion erected by Theron in 488 BC. In addition, a hill in the vicinity of the city was named Rock of Athena, as Diodorus Siculus himself remembers (lib XIII.85). It is probable that the cult of Athena in Agrigento came from Gela, where it was imported by the colonists who came from the island of Rhodes, in which the cult was quite widespread [3]. Camarina
The cult of Athena must also have been widespread in Camarina. In fact, in the archaeological excavations of the ancient city founded by Syracuse, the remains of a temple dedicated to the goddess, dated the 4th century, were found. BC [XNUMX]. 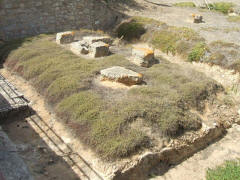 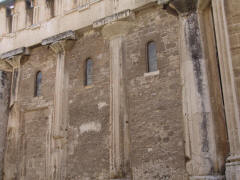 SIRACUSA
A very famous temple existed in Syracuse. Its remains are still visible because they are incorporated in the cathedral of S. Maria delle Colonne. The temple area was discovered following excavations begun at the beginning of the century near the current Cathedral. The Doric-style temple can be traced back to the XNUMXth century. B.C. He speaks extensively about it Cicerone [8] about the looting carried out by the Roman governor Verre. The governor, an expert art thief, looted all the ivory decorations and gold studs that adorned the doors of the front door. He also took away much of the interior furnishings, including a series of painted panels depicting 27 tyrants, the king of Sicily and a cavalry fight of Agatocle [9]. The temple was transformed into a mosque and later into a place of worship for the Christians who erected the current Cathedral. On the pediment of this temple there was placed a golden shield, the last thing the sailors saw when they left with their ships. A ceremony was linked to the golden shield, during which the sailors, who departed from Ortigia, brought with them a chalice full of flowers and aromatic substances that they threw into the sea when, moving away, they saw the shield placed in the temple disappear. [10] The described ceremony, although it actually refers to the worship of Dionysus, would indicate that Athena, as well as Poseidon (the god of the sea), somehow assumed the character of protector of sailors. And indeed, in Greece, the cults of Athena and Poseidon were often related [11]. 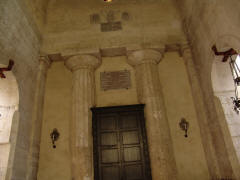 Selinunte
The presence of the cult in Selinunte would be demonstrated by more than one element: by the “large Selinuntina table”, in which the name of the goddess is also mentioned; from a metope now preserved in the National Archaeological Museum of Palermo, depicting Athena; from the fact that the temple of Selinunte, currently referred to simply as temple D, was probably dedicated to Athena.

Termini Imerese
The cult was also to be present in Termini Imerese, where a head of Athena was found, now preserved in the archaeological museum of Palermo [12]. In this locality, moreover, the remains of the temple dedicated to Athena and now called temple B [13] are still visible.

Gela
In Gela the remains of the Athenaion are still visible, where a clay head of an owl was found, the animal sacred to Athena, now preserved in the Syracuse museum. The temple dates back to the sixth century. BC but it was built on another older temple, probably from the XNUMXth century. BC, and the clay head belongs to the latter.

This would show that the latter too must have been dedicated to Athena. It was destroyed towards the end of the XNUMXth century. BC and then replaced by the Doric temple of which large traces remain.

The advent of the Christian religion meant that the cult of Athena became part, together with the cults of Demeter, Aphrodite and Isis, of that syncretic team that brought the cults of the main female divinities into that of the Madonna. In Agrigento, the church of S. Maria dei Greci and in Syracuse that of S. Maria delle Colonne, were built on the places that housed the temples dedicated to the goddess. In Greece, Athena was identified with the Iranian Anahita (which in Iranian means "the immaculate" [14]), whose feast fell on August 15, the same date on which the Madonna is celebrated.

[5] Also known as Agyrion, it was the homeland of the historian Diodorus Siculus who was born there in the early XNUMXst century BC. It is claimed that it is located under the modern town of Agira, between Leonforte and Regalbuto.

[6] It would be the city founded by Ducezio returned from Corinth, where he had been in exile after his defeat in 451 BC by the Syracusans. The site should correspond to that of the current town of Caronia, in the province of Messina, approximately halfway between Cefalu 'and Capo D'orlando.

[7] The Sicilian town was not to be very far from Centuripe; cited by the historians Tucidide and Diodoro, the mercenaries hunted from Catania, from the coalition formed by the Siculi of Ducezio, and from Syracuse took refuge in it. The mercenaries transformed its name into Etna, an appellation that they had previously also given to Catania when it was under their control.

[9] Agatocle (360-288 BC) came to power in Syracuse in 316 BC He dominated the political life of Syracuse for a few decades and was able to carry on that process of unification of Sicily and Greek Italy that had been initiated by Dionysus the old. He effectively countered the Carthaginian threat and died aged 72 after 28 years of reign.