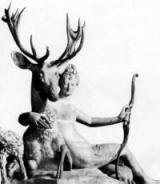 Origins of the myth

According to Greek mythology, Artemide, identified with Italian Diana of the Romans, she is considered the daughter of Zeus and the twin sister of Apollo. Like her brother, she is armed with a bow and loves hunting; however, while Apollo is seen as the personification of the sun, Artemis is seen as the personification of the moon, in fact, he is often represented with his inseparable bow while hunting at night, by torchlight.

In her hunting trips she was often accompanied by beautiful nymphs, and woe to those who dared to attack their virtues: the hunter Orion was, in fact, killed for trying to rape some of his companions.

Mortals weren't even allowed to see Artemis naked, another hunter, named Actaeon, who, having seen the naked goddess, was first transformed into a deer and then mauled by his own dogs. Like the Phoenician god Baal, Artemis once had to receive human sacrifices. It is known, in fact, that in the city of Ephesus in Lydia (Asia Minor) where the temple of Artemis was set on fire in 356 BC, the goddess depicted with numerous breasts was venerated as a symbol of fertility and to whom, in ancient times, human victims were sacrificed. In Attica and Sparta human sacrifices were performed in his honor which were later abolished, although in Sparta, every year during his feast, some children were scourged to blood [1]. Traces of human sacrifices can also be seen in the story according to which the hero Agamemnon, while he was waiting for the right moment to leave with his fleet against Troy, he killed, during a hunt, a deer and, seized by euphoria, he let out the exclamation "Artemis herself could not have killed him like this ". Artemis, hurt by the sentence, caused a calm rise which immobilized the fleet. A soothsayer revealed the cause of the calm by adding that the only solution was to sacrifice to the goddess Ifigenia, the virgin daughter of the king. The sacrifice was arranged but Artemis, pitying, replaced, at the last moment, a fawn for the young woman, whom she kidnapped and transported to the distant land of Tauris in the Black Sea (Crimea), where he made her priestess of a temple dedicated to her. It is probable that the story wants to highlight the departure from human sacrifice thanks to the oriental influence of the cult. Fresco depicting the Sacrifice of Iphigenia House of the Tragic Poet, Pompeii

The departure from human sacrifices and their replacement with animal sacrifices can be found in the festivals that took the name of Lafrie, in honor of Artemide Lafria, during which domestic and wild animals were sacrificed at the stake.

There was also no lack of parties with an orgiastic character, similar to those of Dionysus: like the Ephesians, which took place in Athens at night.

The Cult of Artemis in Sicily

In Sicily the cult of Artemis was particularly widespread; we talk about it to Agrigento, Alesia, Centuripe, Leontini, Murganzia and also in one of the three Ible of Sicily: that of Etnea [2]. Ciaceri recounts that in Centuripe (35 km north-west of Catania), a clay medallion representing Artemis was found hanging from the skeleton of a girl's head, closed in a lead box. According to some versions of the myth Artemis went to the island of Lipari (Aeolian Islands), where the forge of the Cyclops was located to obtain the weapons he needed (a bow, quiver and arrows). The forge of the Cyclops is also located, in other versions and myths, under Etna

SIRACUSA
The cult of this goddess was particularly flourishing in Syracuse, on the island of Ortigia, where her temple stood close to that of Athena [3], with whom she had affinities: both in fact, had been Persephone's companions. Diodorus tells us that Athena and Artemis made, as did Persephone, the choice to remain virgins, and, therefore, were raised together with her. It is no coincidence that the cult of Artemis in Syracuse is linked to that of Demeter and Persephone. Even Artemis is seen by Pausanias as the daughter of Demeter; others, however, consider her daughter of Persephone. Selinunte
The presence of the cult in Selinunte would be demonstrated by the discovery of a metope depicting the goddess and Actaeon, now preserved at the Salinas Archaeological Museum in Palermo [4]. Actaeon mauled by dogs and Artemis

Camarina
In Camarina, the cult of the goddess would be demonstrated by the discovery of some votive statuettes dedicated to the divinity [5], some of these are now preserved in the archaeological museum of Ragusa.

Segesta
In Segesta the cult of Artemis must have been particularly flourishing, as can be deduced from the reading of Cicero (Verrine II.IV.72-80), who describes a bronze statue depicting Diana present in the city and her subtraction by Verre, Roman governor of Sicily from 73 to 71 BC. Cicero says that, among the Segestani, there was a bronze statue of Diana, "surrounded by a very particular veneration that dates back to very ancient times, moreover masterfully performed in a truly original style and with extraordinary skill ".

Segesta was destroyed and sacked by the Carthaginians who took away the statue. After the capture of Carthage by Publius Scipio [6], during the third Punic war, the statue was returned to the Segestani who rearranged it in the ancient site, on a pedestal on which the name of Publius Scipio was carved, in memory of return of the statue.

"the statue was of considerable proportions and considerable height, with a long mantle. And yet even in that majesty, the age and bearing of a virgin transpired. Arrows hung from his shoulder, with his left hand he held the bow, with his right he held out a lighted torch ".

Verre ordered the Segestani to remove the statue and deliver it to him; their refusal was punished with a series of oppressions which, in the end, forced the population of Segesta to submit to the will of Verre and approve a contract for the removal of the statue. However, no Segestan, free or slave, dared to touch the statue to remove it; to solve the problem, some non-Greek workers had to be called from Marsala who, amidst the pain and consternation of the Segestani, removed the statue.

"While Diana was being taken out of the city, all the women of Segesta, both married and unmarried, rushed, sprinkled her with perfumed ointments, covered her with wreaths, escorted her to the borders of their territory, burning incense and fragrant essences". The arrival of Christianity sees Artemis first confuse himself with the devil himself at the night guide of the witches [7], then with the Madonna; not by chance, according to tradition, the virgin Mary lived the last years of her life in Ephesus, seat of the famous temple of Artemis, mentioned above [8]. The Places of the myth of Artemis - Diana has been included in the regional map of places and identity and memory (The Places of Myth and Legends). Even if the recognition of the Sicilian Region is limited only to the places of Syracuse and the Aeolian Islands

Find out more on:

[6] Publius Cornelius Scipio Emiliano, a Roman politician and general, conquered and destroyed Carthage in 146 BC