Cults Myths and Legends of Ancient Sicily
6.3 The Eroi: The Pii Brothers 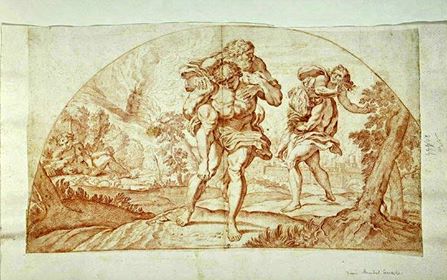 As noted by Ciaceri [1], the legend of the Pii brothers is to be reconnected with the frequent volcanic eruptions of Etna. According to legend, during an eruption, a torrent of lava threatened the properties of the two brothers who, neglecting their material possessions, decided to save what was dearest to them: the life of their old parents, whom they tried to rescue. after having loaded them on your shoulders. The lava stream was, however, very fast and was about to reach them. Miraculously, at the last moment, the lava divided into two sections and then closed again later leaving, in the middle of the island thus formed, the two brothers and parents, who then managed to save themselves.

In the past, this legend must have had a certain reputation if two great cities like Catania and Syracuse fought over the citizenship of the two heroes for years. The legend is probably linked to the action carried out by two primitive inhabitants of the island or originated from the spontaneous phenomenon that often sees the lava, during its descent, distribute itself into two sections. Popular fantasy would then have given its definitive contribution to the creation of the legend as we know it now.