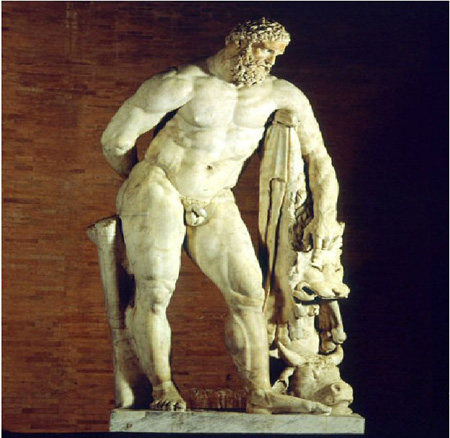 Heracles is undoubtedly the most popular hero in all of Greek mythology. The Latins called him Hercules and it can be said that almost all the peoples of the Mediterranean area tried to take possession of his glory, claiming that he had passed through their territory or identifying him with one of the indigenous heroes, as a local incarnation of the Greek Heracles.

Heracles is the son of Alcmena and Amphitryon, even if the real father is Zeus who, taking advantage of Amphitryon's absence, assumed his appearance, thus managing to deceive Alcmena and spent a night of love with her, the duration of which was, by order of Zeus, of three days and three nights, during which Heracles was conceived. The umpteenth betrayal of Zeus made Hera, the official wife of Zeus, very angry, who persecuted Heracles for life. The name Heracles means: "glory of Hera", meaning with ironic connotations, given the relationship between the two, unless it is understood as "glory through Hera", given that most of the heroic deeds of Heracles were precisely due to the difficulties he had to face due to the tireless Era. 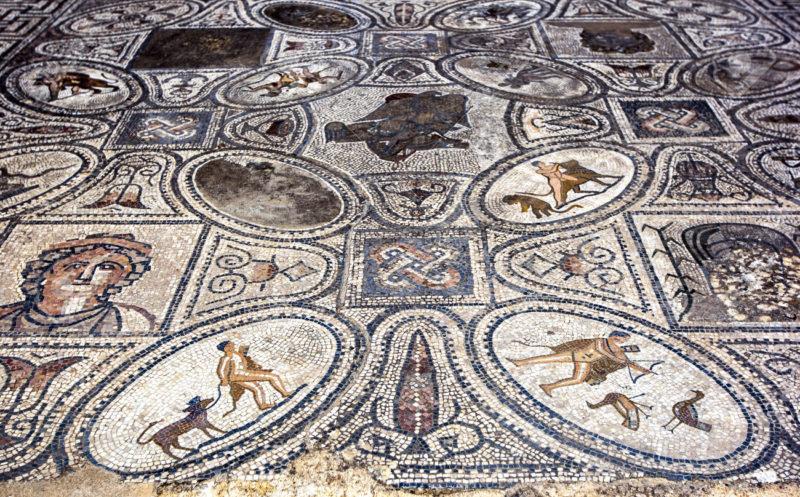 Many writers of antiquity spoke of Heracles, and among these Diodorus Siculus could not be missing who, being Sicilian in name and in fact, more than the others narrated the exploits of Heracles in Sicily [1]. 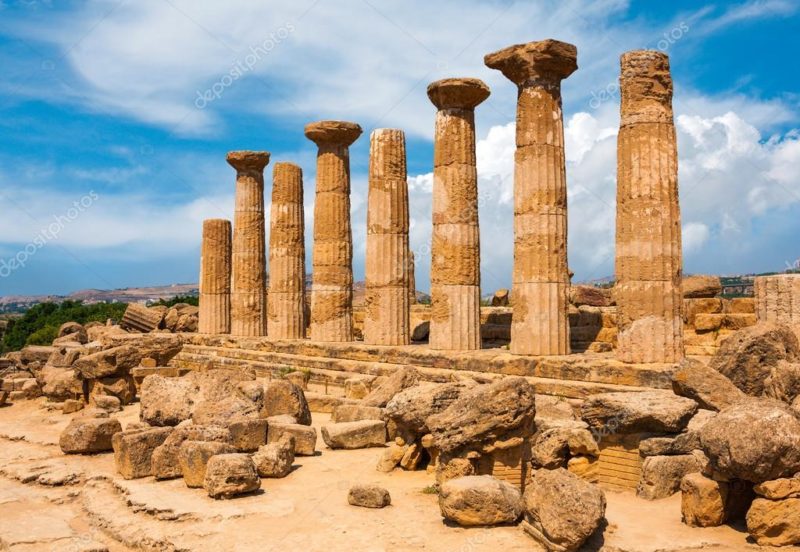 Temple of Hercules - Valley of the Temples - Agrigento

The legendary exploits of this hero were many. Still in swaddling clothes, he strangled the two snakes sent by Hera to kill him, famous are those known as the "twelve labors of Heracles", and other exploits that saw him at the head of armies, and many other secondary adventures, which occurred during the completion of the labors .

Front of sarcophagus with the labors of Hercules Rome, National Roman Museum in Palazzo Altemps

The twelve labors are the deeds that Heracles carried out by order of his cousin Eurystheus, to whom he had to submit to atone for the crimes he had committed, caused by an excess of madness caused by Hera.

Upon his death, Heracles was welcomed among the gods of Olympus, where he finally made peace with Hera, who became his immortal mother, and where he married Hebe, the goddess of youth.

Heracles became immortal, thanks to his efforts, his valor and above all his ability to accept the sufferings that had been imposed on him.

In memory of the twelve labors of Heracles, the Thank you, while in Athens the Iolee, established in honor of him and of Iolao, companion of his adventures.

Among the twelve labors it is during the tenth that almost all the adventures attributed to him in the Western Mediterranean took place. Heracles, in this effort, had to conquer the oxen of Geryon, the three-headed giant, son of Poseidon. Geryon owned a herd of oxen on the island of Erizia, located in the far West, and Eurystheus ordered Heracles to go to the island to pick them up.

Once the oxen were stolen from Geryon, Heracles embarked on the way back which took him to Sicily, where he swam along with his herd. As soon as he arrived he had to clash with the voracity of Charybdis, daughter of the earth and of

Poseidon, who stole some of Heracles' sacred oxen and devoured them. The gesture of Charybdis did not please Zeus very much, who struck her with lightning causing her to fall into the sea in the guise of a monster that swallowed the ships that passed in that point [2].

Heracles decided to make the circumnavigation of the island, then he headed towards the region of Erice but, when he arrived near Imera, he was welcomed by the nymphs, who made springs of hot water gush out, so that he could reassure himself from the fatigue of the journey. After being the first guest of what became the thermal baths of Termini Imerese, he left for Erice, where he faced and won in combat Erice, the son of Aphrodite who had founded the homonymous city. Arriving in Syracuse, he took one of the most beautiful bulls, placed it in the source of Ciane and sacrificed it in honor of Persephone, ordering the inhabitants to annually perform ceremonies and sacrifices in honor of Persephone and Ciane. After Syracuse, Heracles headed towards the interior of the island where he had to face a group of Sican natives who opposed him in battle. He won them by killing many, among them, some important strategists who later received the honors attributed to the heroes by the Sicans. It was also in Lentini and Agirò where he built a sanctuary in honor of Iolao, his companion in arms in the twelve labors and a favorite friend. Since then, sacrifices were offered annually to Iolaus, who in Agirò was venerated as a god and to whom young people sacrificed their hair, after having made it grow from birth.

The Cult of Hercules in Sicily

In Sicily the cult of the hero is related to that of MelKart, and in fact he was also called Ercole Melkarte. Melkart was a Phoenician deity, identified with the god Baal of the Carthaginians and the Semitic deity Moloch, mentioned several times in the old testament for the human sacrifices, especially of children, that were offered to him. For this reason, it is hypothesized that the sacrifice of the bull that Heracles made in Syracuse in honor of Ciane and Persephone was originally a human sacrifice dedicated to Melkart. 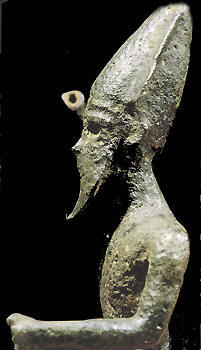 In the story of Diodorus, however, no relations with the Phoenician Melkart are highlighted, on the contrary we can glimpse the hypothesis that Heracles was, in fact, the representative of that Doric lineage that, later, would colonize much of Sicily.

One could see in the myth of Heracles, an element of oriental origin, in the part where we talk about the struggle between Erice and Heracles. The Phoenicians, in fact, were the original lords of the land of the Elymians, and the close relationship between Elymian elements and Phoenician-Punic elements would suggest that the god Melkart (and therefore the Punic Baal) was revered in the north-western part of Sicily, in where the Elymian culture was predominant.

In any case, it is probable that the Phoenician-Punic religion influenced the cult of Heracles in the places where it was professed.

The oriental influence of his cult would be motivated by some analogies that exist between Heracles and an ancient Sumerian figure, Gilgamesh, whose origins are very ancient [3]. Gilgamesh is accompanied by his friend Enkidu, Heracles from the faithful Iolaus; both have to do with sacred bulls; they have, at times, mental instabilities, Heracles with his fits of madness (caused by Hera), Gilgamesh tormented by the thought of death. All this leads us to think that the genesis of the cult of Heracles is oriental, except that it was the Greek literature that spread and characterized his cult more. What could have happened in Sicily would seem an attempt by the Punics to reclaim a myth of which they kept an ancient memory.

The cult of Heracles was strongly felt in the western areas, of Elymian and Phoenician influence then, a Palermo, Mozia, Erice, Entella [4], Solunto, but it was also present to some extent in the eastern part of the island. 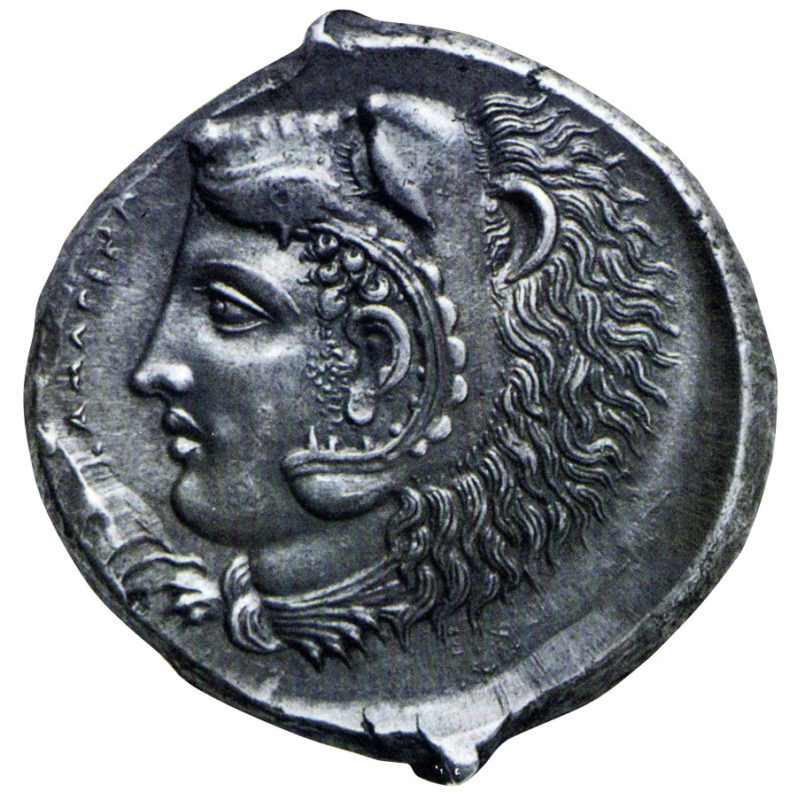 Temples were also erected in Agrigento, Messina and Syracuse, while a Selinunte the cult is confirmed by an inscription and a metope representing Heracles struggling with a bull.

There are many archaeological finds that indicate the presence of the cult of Heracles in Sicily. The stems of Poggioreale with a dedication to Heracles [5], still in the same museum there are, from Selinunte, some metopes depicting the labors of Heracles [6] and the famous "Big Selinuntina table" where some gods are thanked, including Heracles considered one of the great deities of Selinunte. 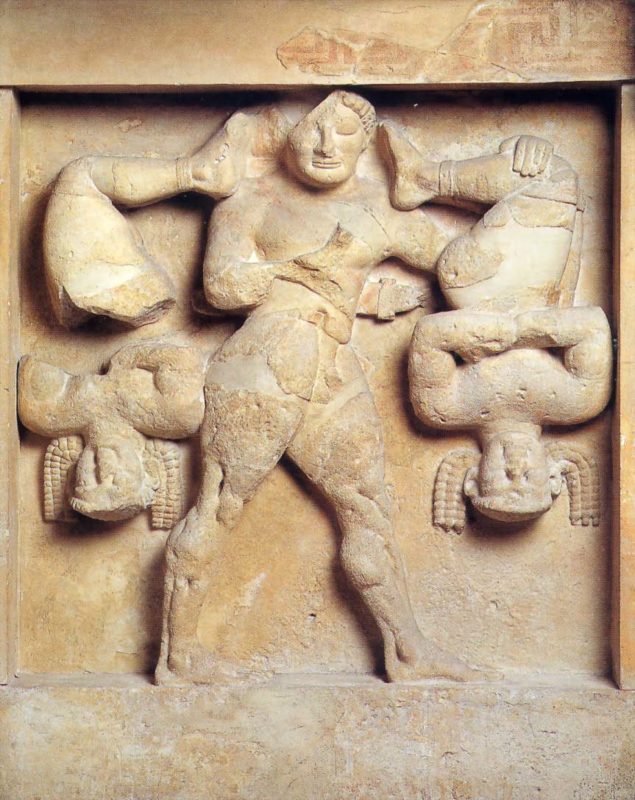 Hercules and the Cercopi (from the temple C of Selinunte)

In Agrigento is famous the so-called temple of Hercules which dates back to the sixth century. BC [7], one of the oldest in the city. The attribution of the temple to Hercules is deduced from a story by Cicero [8], in which referring to Verre's attempt to appropriate the bronze statue of Hercules that stood in the temple dedicated to him "not far from the main square“, He states that, while Verre was in Agrigento, at night a group of armed slaves attacked the temple, after having defeated the keepers. Using poles for leverage and ropes, they tried to remove the statue but, attracted by the screams of the keepers, the entire population intervened and put the assailants to flight who, however, managed to appropriate two small statues.

Still the same Cicero narrates that Verre took away from a private chapel of a rich lord of Messina a bronze statue of Heracles, attributed to the statuary of the fifth century. BC Mirone of Eleutene (Boeotia) [9].

In Piazza Armerina, one of the mosaics of the late antique villa del Casale depicts the labors of Hercules and another, representing a circus race, reproduces three sanctuaries, one of which would be identified with that of Heracles who must actually have been nearby [10]. 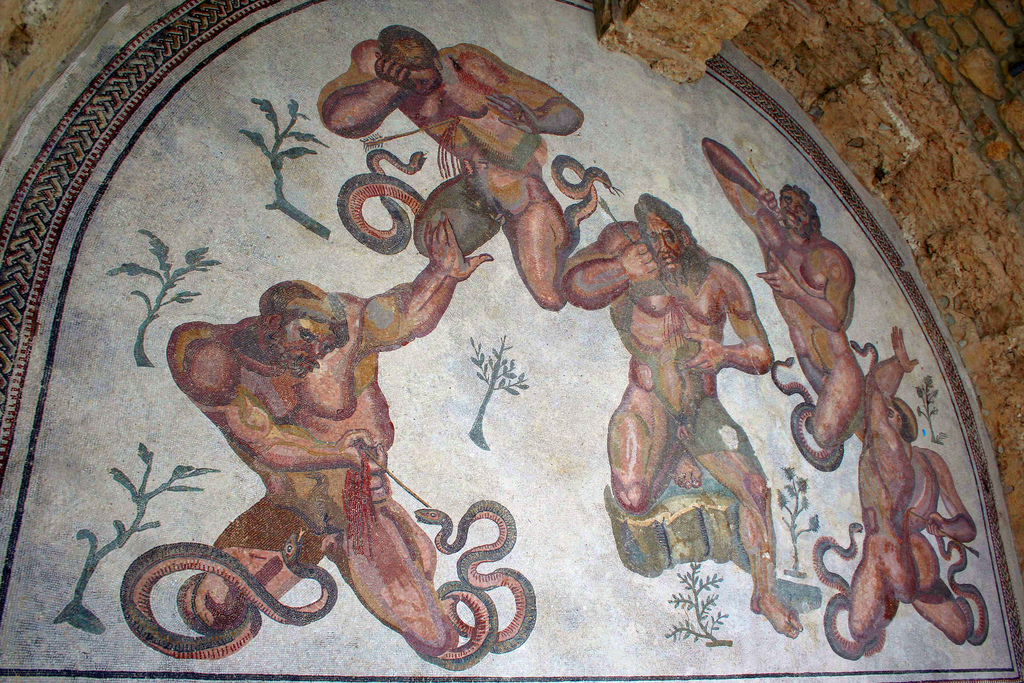 At the regional museum of Syracuse there is a head depicting Heracles of the second century. BC coming from Centuripe.

A sculpture representing the hero from the port of Catania can be found in the Ursino Castle Museum in Catania.

A Hellenistic head of Heracles is found in the Mandralisca Museum in Cefalù to indicate that this cult must have been known in this locality as well.

Traces of the cult of Heracles are also present in Imera where, in the so-called temple B, fragments of high-reliefs with scenes of the labors of Heracles were found [11].

Ciaceri [12] tells how in modern times, in Agirio, there was the custom of sacrificing one's hair to St. Philip (the patron saint of the city) who, in a syncretic key, replaced Iolaus, the faithful friend of Heracles.

[2] The figure of Charybdis is similar to that of Scylla, the other monster who created currents that swallowed sailors. As for Charybdis, even in the guise of a monster he was particularly voracious: three times a day he swallowed a large amount of water, attracting anything that was floating around in his throat, then pumped up the absorbed water.

[3] There is talk of this figure as early as 2400 BC, and it is thought that the first versions are based on even older versions.

[4] The site of the ancient Entella would have been identified in Monte Castellazzo, not far from Poggioreale, one of the centers of the Belice Valley destroyed by the 1968 earthquake.