Cults Myths and Legends of Ancient Sicily
6.6 The Eroi: Daedalus and Minos 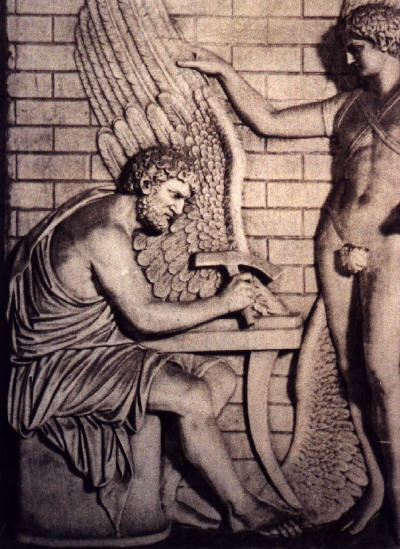 Legend has it that Daedalus Athenian by birth, was an expert architect and sculptor, famous for his ability to sculpt statues that, due to their naturalness, seemed alive. Daedalus had as a disciple a young man named Talus, son of his sister. The nephew, of high genius, invented various machines including the saw and the drill. His fame almost overshadowed that of his teacher who, blinded by jealousy, killed him. Daedalus, discovered and accused of the murder, was forced into exile, first in Attica and then in Crete where, admired for his skills, he became a friend of King Minos. It was the custom, in those days, for King Minos to sacrifice, annually, to Poseidon the most beautiful of the bulls of his herds. One day, however, a beautiful bull was born, and Minos, struck by such beauty, refused to sacrifice it to the god, offering another one in its place. Angry Poseidon caused Pasife, the king's wife, to fall in love with the bull. Minos's wife was pining for the desire to mate with the animal, but this presented some small practical problems, as well as moral. Daedalus then built a statue in the shape of a cow, hollow inside, covered it with cowhide and, to complete the work, taught Pasife how to settle inside so that he could join the bull. 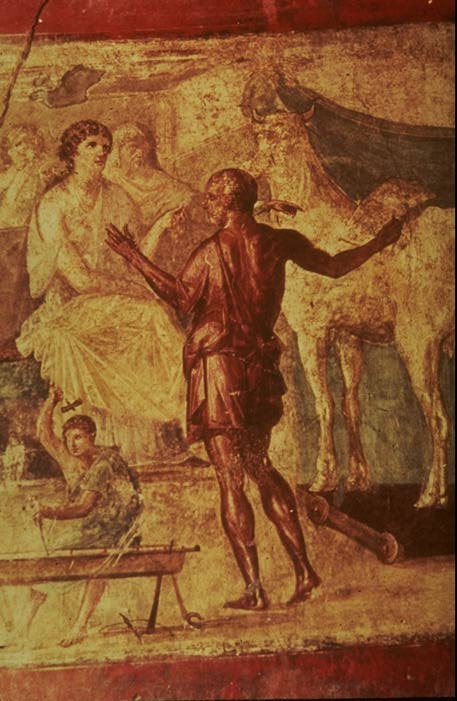 From this union a horrible creature was born, the famous and mythical Minotaur, half bull and half man. Minos did not have to appreciate much the help that Daedalus had given to Pasife, also because if the horns hurt, made by a bull they hurt even more. However, despite everything, Minos continued to keep Daedalus with him, but he had him build a labyrinth in which he hid the Minotaur to whom, periodically, human beings were sacrificed. 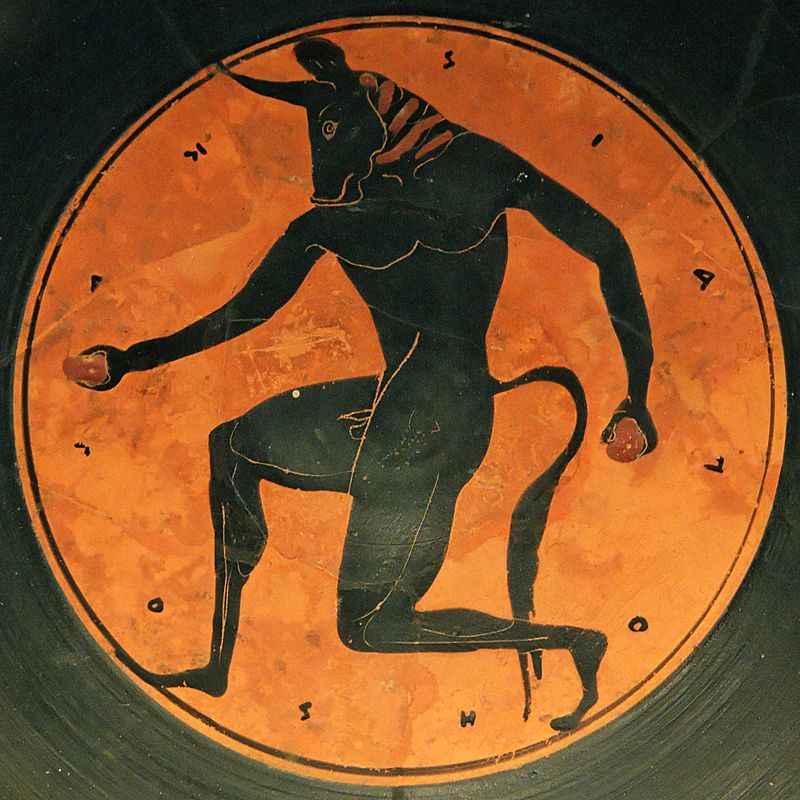 When the Athenian Theseus came to Crete to kill the Minotaur, Daedalus advised Ariadne, daughter of Minos, who had fallen in love with Theseus, to give him the ball of yarn that would allow him to get out of the labyrinth. Minos, having learned of this new intrigue by Daedalus, got very angry, and Daedalus decided to flee Crete together with his son Icarus, helped by Pasife who got him a ship to escape. Arriving on an island, when getting off the ship, Icaro, due to his bravado, fell into the sea and died. 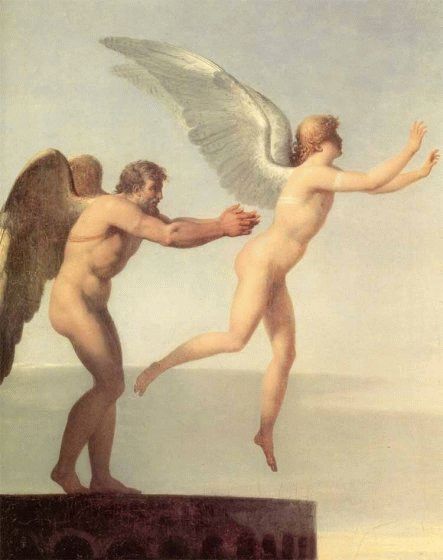 Daedalus, arrived in Sicily near the territory where the Sican king Cocalo reigned, who received him at court and became friends. This version of Daedalus' escape from Crete is told by Diodorus Siculus [1]. Another, more famous version, mentioned by Diodorus himself, tells instead that Daedalus, unable to flee aboard a ship because they were all under the control of Minos, remained in Crete, hidden by Pasife, until he built, for himself and the son, wings modeled with wax. Applying their wings, they managed to escape in flight from Crete but, while they were in the open sea, Icarus, despite being recalled by his father, flew too high, the wax that held the wings together (due to the heat of the sun) melted , fell into the sea and died. Daedalus, on the other hand, flying close to the sea and often wetting his wings, managed to arrive safely as far as Sicily.

As can be seen, in both versions the inexperience and youthful bravado are highlighted, as if to want to moralize the young so that they submit to the experience of adults.

Daedalus lived for a long time with Cocalo and the Sicilians, proving his ingenuity and building many works in Sicily. Among the works attributed to him it is worth mentioning the construction of an artificial cave near Selinunte, where the fumes that evaporated from the fire were such that they made people sweat slowly, leading to the healing of the cave-goers who had some ailment.

In Erice, on a rock that rose overhanging where the temple of Aphrodite was, Daedalus built walls with which he widened the raised shelf on the ravine, which was at the base of the temple and also built a golden ram of admirable beauty.

In Agrigento, on the Camico river, Daedalus built a city perched on a mountain, which would later become the strongest and most impregnable in Sicily, in fact, the ascent to its summit was narrow, twisted and could easily be defended by a few men. For this reason, Cocalo moved his royal residence from the city of Inico to the new city, to which he gave the name of the nearby river and where he kept his treasures [2].

The king of Crete Minos, having learned of Daedalus' flight to Sicily, organized an expedition. Prepared a fleet, he left Crete, landed with his ships in a locality in the territory of Agrigento, which was later named in his honor Minoa, and to find Daedalus he used a particular stratagem: he promised, in the places where he passed, a reward to whoever would be able to pass a thread through the spirals of a snail shell. Cocalo proposed the solution to Daedalus who tied the thread to an ant pushing it into that new labyrinth. When Cocalo had Minos brought the shell, he understood that Daedalus must be nearby and sent ambassadors to ask Cocalo to return the fugitive to him. Cocalo, then, invited Minos and, after having promised to comply with his requests, invited him to his house, where he had wonderful bathrooms designed by Daedalus and allowed Minos to use them, but while the latter, not at all suspicious, washed himself served, according to the custom of those times, by the daughters of Cocalo, the girls, violating the sacred laws of hospitality, drowned him and kept him in hot water until he died. Cocalo returned the body to the Cretans, telling them that Minos had died by accidentally slipping into hot water.

The Cretans asked and obtained to bury their king sumptuously, built a two-story tomb where, in the part hidden from the earth they placed the bones and in the raised one they built a temple dedicated to Aphrodite [3].

According to tradition, one of the places where Minos is said to have been buried is Heracles Minoa. 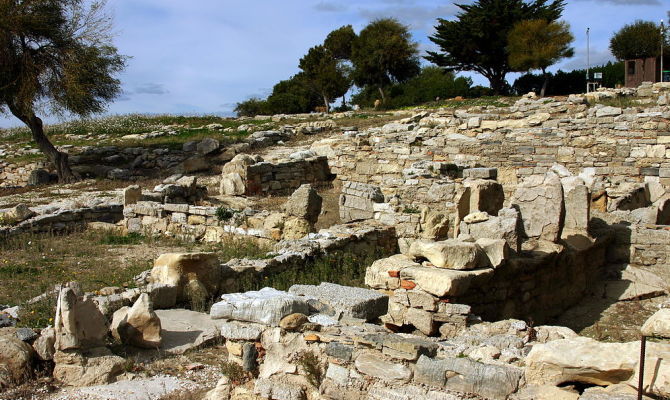 Daedalus, finally free, lived in Sicily until his death. According to another version, Daedalus, after having lived for many years with the Sicilians, moved to Sardinia, where he built the nuraghi, also called dedalei.

The legend of Daedalus and Minos in Sicily is, in some way, considered the myth of a phenomenon of colonization by some Cretans that occurred long before the eighth century. BC, an epoch corresponding to the arrival of the first Greek colonists. The hypothesis could be strengthened by the fact that the Cretan regime was monarchical and Minos was probably not the name of a king but the title that was assigned to the kings of Crete [4].

Archeology has now dispelled all doubts about the fact that the Greek influence in Sicily began long before the colonization, which took place in the eighth century. BC A presence from the Aegean must have existed in Sicily in the Bronze Age, when the Minoan civilization was still flourishing in Greece. The type of presence had to be mainly of a commercial nature, therefore with superficial and not lasting contacts with the indigenous populations, even if the latest findings, which took place in S. Angelo di Muxaro and Thapsos, would suggest, in some cases, a more stable form of permanence.

The Minoan-Mycenaean influence can be found in many areas of Sicily. A lot of material dating back to the Mycenaean period (Mycenaean IIIA and Mycenaean IIIB) has been found in Thapsos [5]. In this locality the Mycenaean influence on the indigenous cave tombs is also evident and a stone settlement has been identified, considered the largest and most important of the Middle and Late Bronze Age (XIII-XII century BC) not only in Sicily, but of the whole area of ​​the western Mediterranean. Mycenaean pottery has been found in various places in the Syracusan area and also in the Aeolian Islands where pottery dating back to the late Minoan period (XNUMXth century BC) has been found and, therefore, among the oldest found in the West. 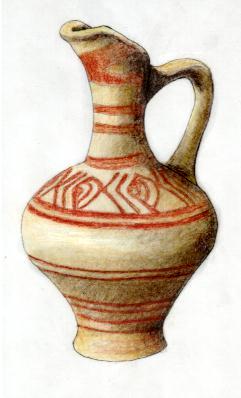 Jug of Mycenaean III A from the necropolis of Thapsos. Syracuse Regional Archaeological Museum

Another particularly rich area is central southern Sicily, especially S. Angelo di Muxaro, identified by some with the ancient Camico and linked to the legend of Cocalo and Minos. Here, in addition to some tombs resembling the 'tholoi'Cretan-Mycenaean, four gold cups were found, of which only one is preserved in the British Museum. It is decorated with six cattle, whose heads are of the Cretan type attributed to a local handicraft of the Mycenaean tradition.

The hypothesis is therefore strengthened that the legend of Cocalo and Minos may reflect a Greek presence starting from a pre-colonial period, ie before the eighth century. B.C. In this regard it could be significant that the name of Cocalo appears on tablets in Linear B [6] found in Pilo, in the Peloponnese [7]. 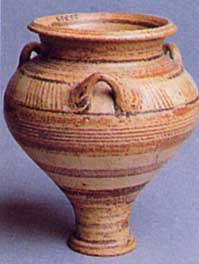 [2] We wanted to identify this fortress with the ancient town of Camico, the site of which is believed to be that of S.Angelo di Muxaro, 26 km north-west of Agrigento.

[4] The first important European civilization was born on the island of Crete, the Minoan one which reached its peak towards the sixteenth century. BC It was characterized by an intense commercial and seafaring activity which probably led the Cretans to have commercial relations, even if perhaps not lasting, with the indigenous populations of Sicily. Around 2500 BC, Indo-European populations descended from the Danube areas to Greece, including the Achaeans who, having come into contact with the Minoan culture, understood its characteristics; the culture that emerged took its name from the city of Mycenae, the stronghold of the Achaeans, and was called the Mycenaean culture.

The newcomers spread an Indo-European language in Greece, which later became Mycenaean Greek. Around 1450 BC, the Achaeans extended their dominion over Crete by destroying what remained of the Minoan civilization. The maximum splendor of the Mycenaean civilization goes from 1600 to 1150 BC, and from 1400 to 1200 there is a great expansion of this civilization in the Mediterranean regions that also touches Sicily, as evidenced by the innumerable archaeological discoveries. Towards 1150 BC a further invasion by Indo-European peoples, that of the Dorians, put an end to the Mycenaean civilization, causing a reduction of the Mycenaean presence in the Mediterranean, and opening the doors to the commercial presence of the Phoenician element in the area.

[6] Linear B is a spelling system in which the symbols are mostly letters and derive from Linear A; while linear A was the system used by the Cretans, whose phonetics were different from the Greek one, linear B was instead used by the Mycenaeans who spoke Greek and from whom they had borrowed the spelling system; the linear B form of writing will disappear with the Doric invasion that put an end to the Mycenaean civilization. 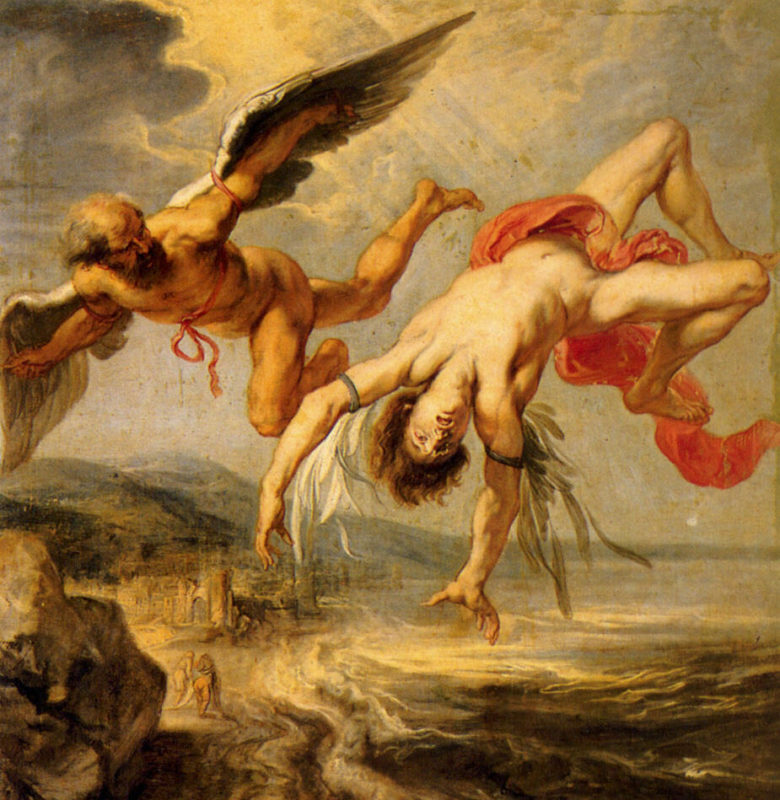