Origins of the Sibyl

The Sibyl is basically a priestess with prophetic virtues and there are many legends concerning her. Particularly famous was the Sibyl of Cuma [1], also known by the name of Amalthea, who lived in a cave and had the task of making known the oracles of Apollo. 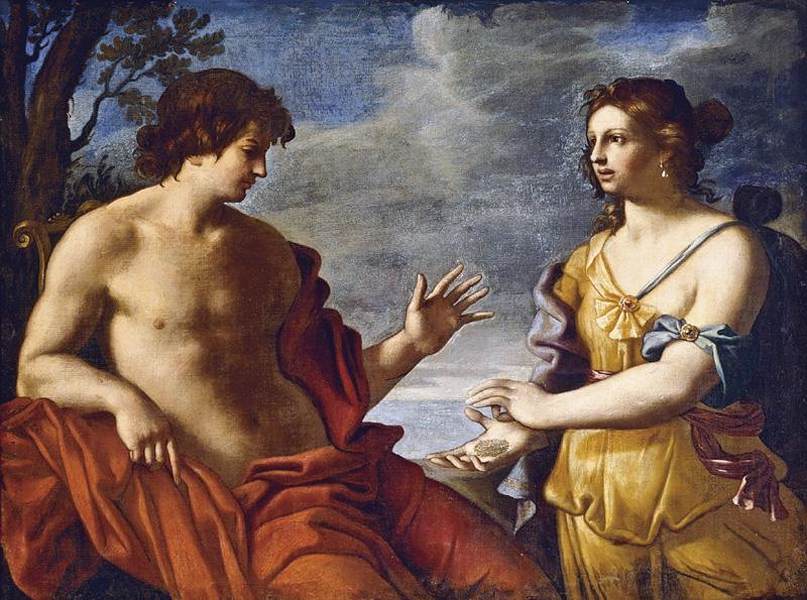 It is said that Apollo, who fell in love with Amalthea, invited her to make a wish, she asked to be able to live as many years as the grains of sand she could hold in her hand, but forgetting to ask for youth at the same time. Apollo offered the Sibyl, in addition to what he had asked of him, even youth on condition that it was granted, but the Sibyl gave up in order not to lose her virginity. Thus, as the Sibyl grew older, her body dried up until, after about a thousand years, it dissolved into dust and her voice remained, which continued to utter the oracles of Apollo. 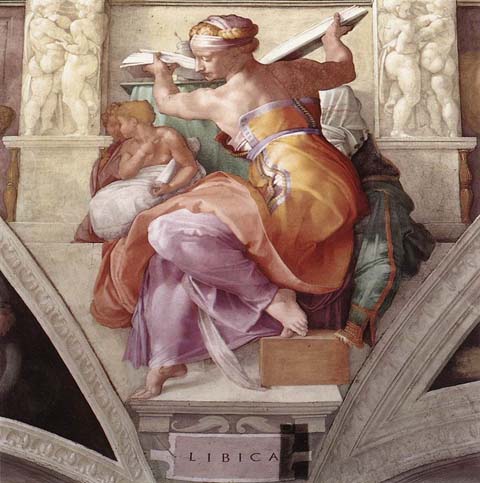 The cult of the Sibyl of Cuma was particularly flourishing in Rome, where the sibylline books. According to tradition, these books were sold directly by the Sibyl to Tarquinio Prisco [2] and would have been destroyed in the fire that broke out in the Capitol during the civil war that saw Mario and Silla opposing each other.

The Cult of the Sibyl in Sicily

In Sicily the Sibyl of Cuma was identified with the Sibyl of Lillibeo (today Marsala) where, in a cave it was said that she lived or was buried. Inside the cave there was a miraculous well, whoever drank its water became a fortune teller and was able to predict the future. Diodorus also speaks of this well about the landing of Hannibal in the promontory of Lillibeo in 409 BC [3]. The Carthaginian army would have camped near the well of Lillibeo and, many years later, this was the name given to the city founded in its vicinity [4].

The well of Lillibeo, therefore, was known even before the homonymous city was founded; it is probable that the place was originally the seat of a cult similar to that of the Sibyls, and that only later, another one was superimposed on it, identifiable with that of the Sibyl of Cuma.

The fact that the cult of Apollo was particularly felt in the place, of which the Sibyl was the priestess, also contributed to the localization of the Sibyl in Lillibeo, as evidenced by the same civic coat of arms of Marsala depicting Apollo with the lyre.

In a bronze coin from the Roman era, on one side, a tripod is wrapped around which a snake is wrapped (both are attributable to Apollo), on the other side the face of the Sibyl appears inside a triangle representing Sicily .

The cult of the Sibyl must have had a particular meaning throughout the region, if the foundation of Palermo is attributed to this figure, which took place before the Sibyl herself settled in Lillibeo.

In the cave of the Sibyl, or in its immediate vicinity, there was probably a temple dedicated to Apollo. This testifies how the Sibyl was comparable with the Pythia of the temple of Apollo in Delfo, only that the Pythia was actually a priestess in flesh and blood, while the Sibyl of Marsala was a non-corporeal figure, a spirit present in the cave that manifested itself through the water of the well.

With the arrival of the Christian religion, the cult of the Sibyl did not disappear, but was transformed into that of St. John. The Sibyl and St. John are linked by the exercise of prophecy, the first in honor of Apollo, the second in the name of Christ, and for both of them the water takes on a miraculous meaning. The Sibyl offers the knowledge of the future through the water of the well, St. John offers the knowledge of God thanks to the baptism carried out with water. And, in fact, the church of S. Giovanni Battista was built above the cave of the Sibyl in 1576 and a statue of the saint is even placed inside the cave, on what was perhaps the altar of Apollo. 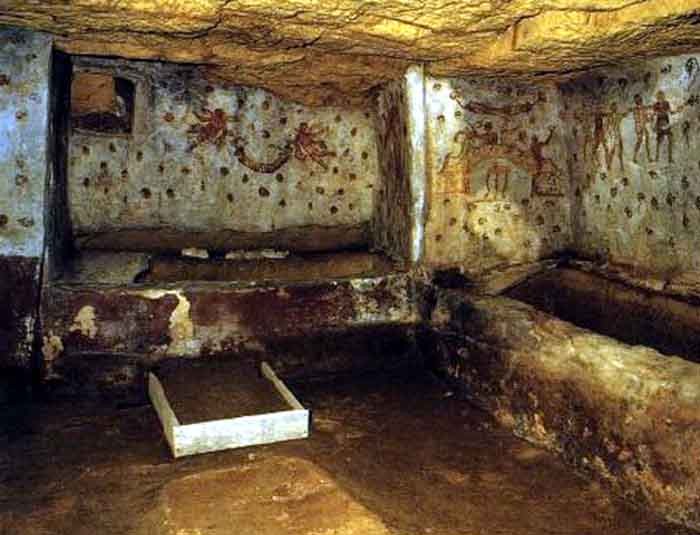 It is said that the water from the well, normally brackish, became, for a single moment, sweet and limpid, and was even healthy for the sick [5]. The Sibyl was remembered in the rite of scutu  (listening) that some women did on the eve of the feast of St. John. These went to consult the dear Sibyl who lived in the cave and questioned her about the fidelity of their husbands or, if unmarried, asked if they would get married the following year; in doing this they drank the water from the well, then some entered into a kind of mystical delirium (perhaps because of the water that was not too drinkable!). The questions were asked aloud on the opening of the well which, due to the characteristics of the place, favored an echo, which was appropriately interpreted by the applicants. 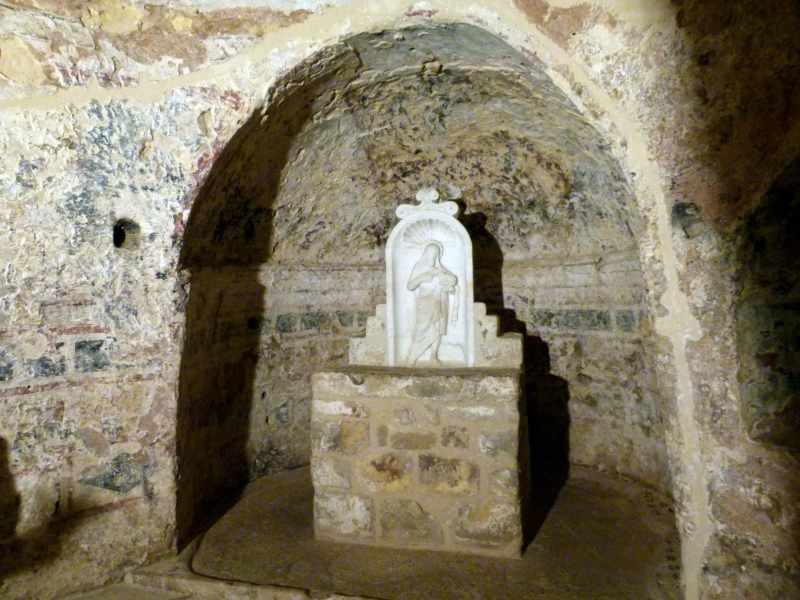 It can be seen, in the rite of scutu, a certain analogy with the ancient oracle of Claro, a small island in the Aegean Sea, home to one of Apollo's oracles. The oracle was an illiterate. Those who went to consult him only spoke his name, then he retired to a cave where he drank water from a mysterious spring and gave his answer in hexameters [6].

Another strange custom took place in the Sibyl's cave. On the occasion of the feast of St. John, many people went to be bled, even once they counted up to 400 in one day [7].

The intertwining between the pagan Sibyl of Apollo and the Prophet St. John continues in the story where it is said that, in the cave, St. John was seen who, with a weather vane in his hand, went around the well giving life and beneficial virtues. to its waters. Thanks to these waters they healed those sick who washed or drank in it while praying to the saint or plunged into it three times invoking the name of the Father, of the Son and of the Holy Spirit.

Popular belief has also attributed to this place the classical one truvatura, that is, an enchanted treasure; it is said that on the night of St. John in the cave an enchanted fair takes place for a few lucky ones in which, for little money, large golden oranges can be obtained.

The well is now closed to the faithful of S. Giovanni, in its place another one was built in front of the statue of the saint.

Marsala is not the only case in which the very ancient belief of the Sibyl has crept into a Christian religious context. An ancient tradition has it that in the Ragusa area, near Scicli, the last battle between Christians and Saracens took place and that the Madonna appeared, siding at the head of the Christians to defeat the Arab army. On the Saturday before Palm Sunday, considered the anniversary of the apparition, a sacred representation of the battle took place, in which the Madonna, in the guise of a warrior Amazon, intervened to help the Christians by massacring the Saracens. At a certain point of the performance three children went up on stage, one of them dressed as an angel, the other two, in women's clothes, were called by the people scibilli (sibyls); the Sibyls sang prophetic hymns in honor of the Savior Madonna and after them the angel intoned, with a very high voice, a chant whose initial stanzas were:

Beautiful image uninvited! to you Reina,

[1] Cuma is an ancient city of Campania, possibly founded by the Calcidesi in the eighth century BC and is one of the first Greek colonies in Italy.

[2] Tarquinio Priscus, called the Superb, was the fifth king of Rome, reigned from 616 BC until his death in 579 BC

[4] Lillibeo, now Marsala, was built in 397 BC by the survivors of the city of Mozia, destroyed by Dionysius of Syracuse. 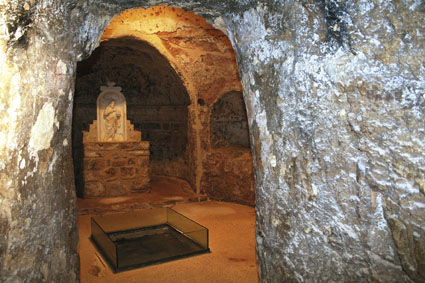