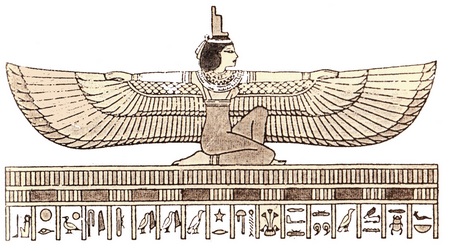 Isis the Egyptian goddess is the sister and wife of Osiris and mother of the sun god Gold. His cult spread in the Greco-Roman world probably around the III, II century. B.C. and was associated with that of Demeter. In fact, there are many affinities that bind the two goddesses: both are linked to mysteriosophical cults; Isis is sometimes represented in the form of a cow and Demeter, to escape Poseidon, is transformed into a cow; while Demeter goes in search of her daughter Persephone kidnapped by Pluto, Isis goes in search of Osiris killed by Set, the god of shadow. Among the symbols that are often associated with Isis are the scepter and the snake.

The similarities with Demeter and above all the affinity of her cult with that of all the other female divinities considered "the great mothers" (Cybele, Gaia, Rhea, Era) meant that around Isis that religious syncretism was soon formed, concerning the female divinities, which have already been mentioned. 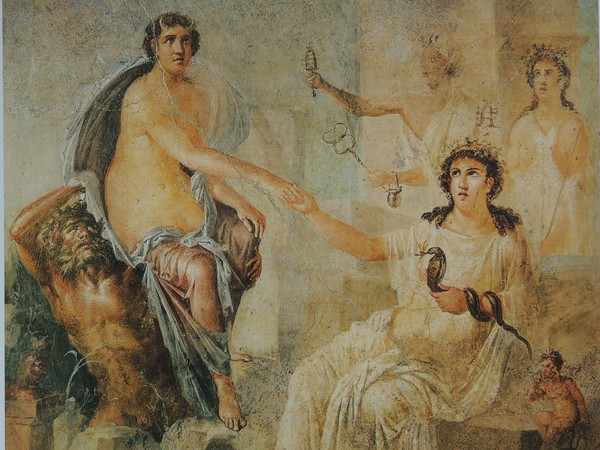 Fresco on intoned from the temple of Isis in Pompeii: Archaeological Museum of Naples

In honor of Isis, in Rome, the Isie, which lasted from October 28th to November 5st. Also in Rome, on March XNUMX, on the occasion of the resumption of navigation, the Isidis Navigium, during which a small sacred boat, loaded with spices, was pushed into the sea as a propitiatory sign. A very similar ceremony took place in the Greek Corinth, where there was a temple dedicated to Isis Pelagia [1]. 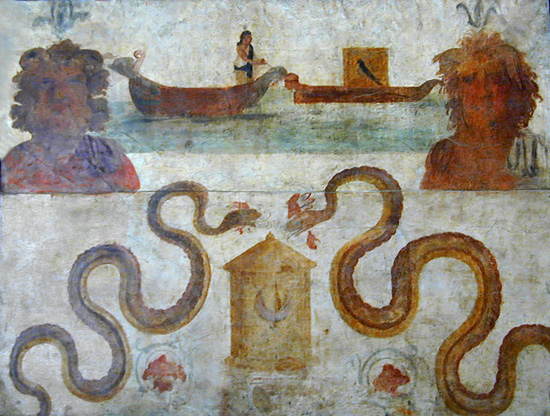 Isidis Navigium: Fresco at the Archaeological Museum of Naples

The cult of Isis in Sicily

In Sicily, the cult of Isis was associated with that of Serapis, as well as that of Demeter and Persephone.

In Taormina, under the church of San Pancrazio, the remains of a temple dedicated to Isis and Serapis are still visible. That the temple was dedicated to the two Egyptian gods is confirmed by the discovery, not far from the temple, of two inscriptions with dedications to the two deities (one in Latin and the other in Greek) and of a statue of Isis currently preserved in the Archaeological Museum of Palermo; of the two inscriptions, the one in Greek is kept in the antique dealer of Taormina.

In Syracuse and Catania bronze coins were found depicting both Isis and Serapis [2] and also in Syracuse were found inscriptions with dedications to the two divinities.

The main center of the cult of Isis in Sicily was Catania where, in addition to bronze coins, many terracotta statuettes depicting Isis and figures connected to her cult were found.

Traces of the cult of Isis would also be found in Palermo, where, in the National Archaeological Museum, there is a marble statue which in the nineteenth century was erroneously restored and attributed to the goddess Flora [3]. In reality it is a Hellenenic statue of the second century. BC representing the Egyptian goddess [4]. 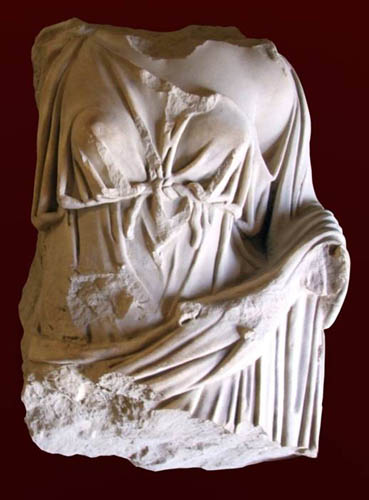 A stone inscription attesting the presence of the cult in Lilibeo was found in 2008. The inscription has now been integrated and reassembled in its entirety with a second large fragment which was kept since 1903 in the warehouses of the Whitaker Museum on the island of Mozia. 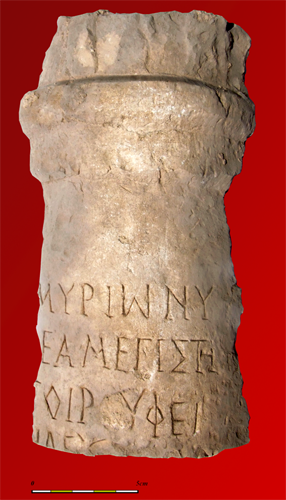 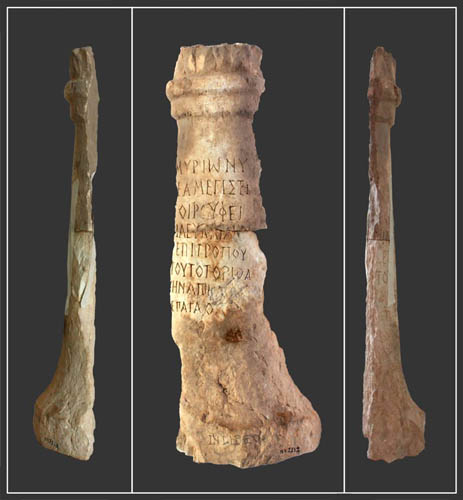 The arrival of Christianity meant that the syncretic context formed around Isis also interested the Madonna, the great Mother of Christians. Not surprisingly, the cult of Isis was particularly flourishing at the beginning of Christianity, also in consideration of the fact that, like most of the mysteriosophic religions, that of Isis was a "religion of salvation“, As the Christian religion later became. Some aspects of her cult and of those relating to other syncretic divinities were absorbed by the cult of Mary.

The syncretic link that linked the Christian religion to the cult of Isis explains why, in the fourth century (therefore in full swing it was Christian), the Roman feast of Isidis Navigium was still flourishing, unlike the other pagan feasts that were, instead, disappearing.

Ciaceri [5] recalls an ancient Catania tradition according to which, in ancient times, a pagan festival was celebrated in honor of a statue of a woman holding a baby to her breast; and in fact, in Egypt, Isis was often depicted with her son Oro in her arms, as if to anticipate the typical Christian figure of the Madonna and child. 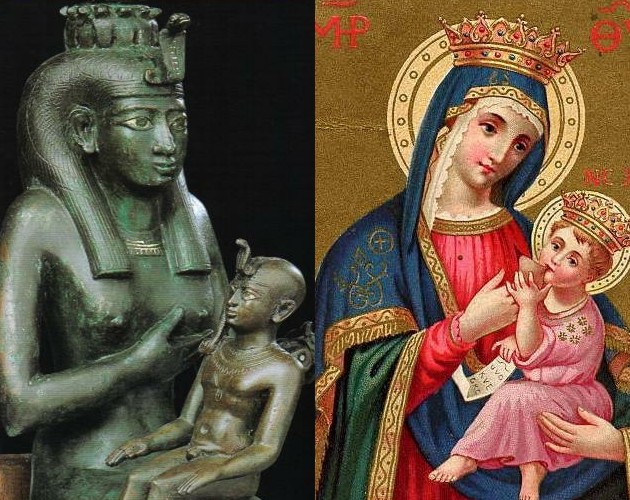 It is also thought that the same holiday season is linked in its origins to the cult of Isis. One of the feasts that were celebrated in Alexandria in Egypt consisted, in fact, in exposing to the faithful, on the night between 24 and 25 December, a small statue probably representing Orus, the sun god son of Isis, who was greeted with exclamations. who praised his birth, which took place from the virgin Isis [6]. It seems that similar ceremonies took place throughout the Mediterranean basin even before the Christian religion was established. The ceremonies generally took place during the winter solstice which, according to the Julian calendar, fell on December 25th. The first Christians celebrated Christmas on January 6th. Only around 300 was it decided to adopt the date of December 25th to celebrate the birth of Christ, son of the Virgin Mary.

The reason why it was decided to replace the feast dedicated to the sun with that dedicated to the birth of Jesus was, probably, the attempt to frustrate the popularity of pagan feasts that opposed the affirmation of the Christian religion, especially since they participated in the feast of the sun. even the Christians. In the 25th century, the feast of December 7 was still connected to the sun. In fact, St. Augustine was forced to exhort Christians to celebrate Christmas not for the sun but for the one who created it and Pope Leo the Great blamed the still widespread belief that Christmas was for the sun and not for Christ. [XNUMX].

In Catania, the cult of Isis was probably absorbed by that of S. Agata, patron saint of Catania, considered protector of weavers, invoked against breast diseases and celebrated on February 5th. To support this hypothesis there would be the many similarities between the feast of S. Agata and the ancient feasts in honor of Isis [8]. 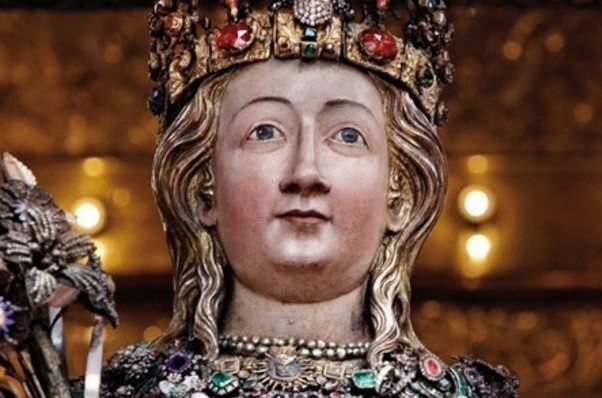 Traces of the religious syncretism that binds S. Agata and Isis would be identifiable by observing the monument located in Piazza Duomo and which has become the symbol of Catania. 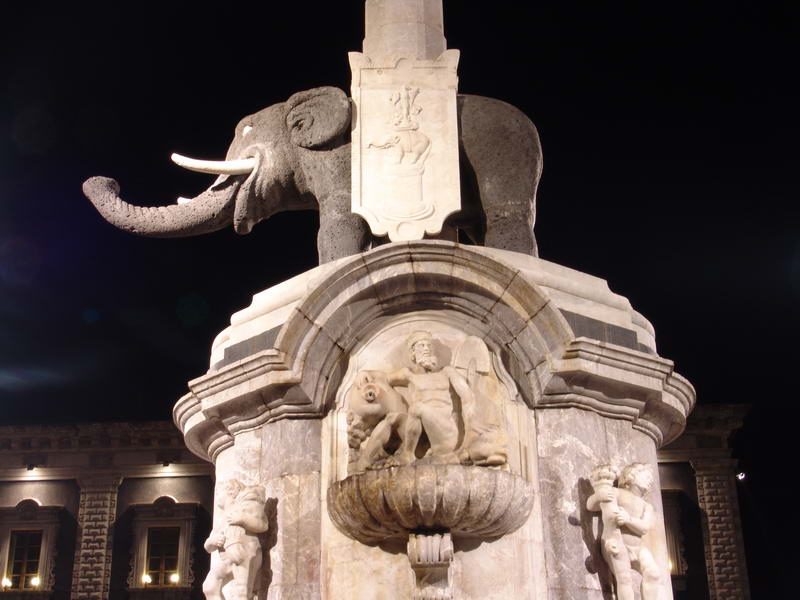 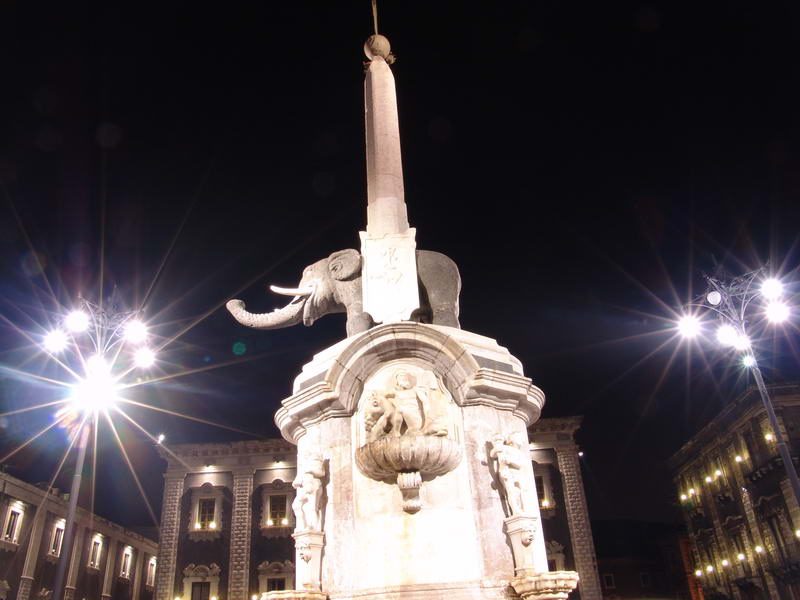 This monument, built in 1736 by Giovan Battista Vaccarin who was inspired by Bernini's fountain in Piazza della Minerva in Rome, represents a lava elephant holding on its back an Egyptian-style obelisk, in Siena granite, almost four meters high ('u Liotru ', that is the elephant, as it is called by the people of Catania). The presence of hieroglyphs in the obelisk is attributable to the ancient cult of Isis. At the top of the obelisk there are also symbols: lilies, palms, the cross and the globe; the lilies and palms are attributed to S. Agata, the palms, however, allude to the rays of the sun, and are also attributes of Isis. The base of the cross bears the inscription (which also appears on the cathedral of Catania):

what does it mean:

"The mind of St. Agatha is holy and spontaneous for the honor of God and the liberation of the homeland [9]"

Finally, note the presence of Minerva on the elephant's saddle cloth, which underlines the vision, in a syncretic key, of Isis, Minerva and S. Agata. 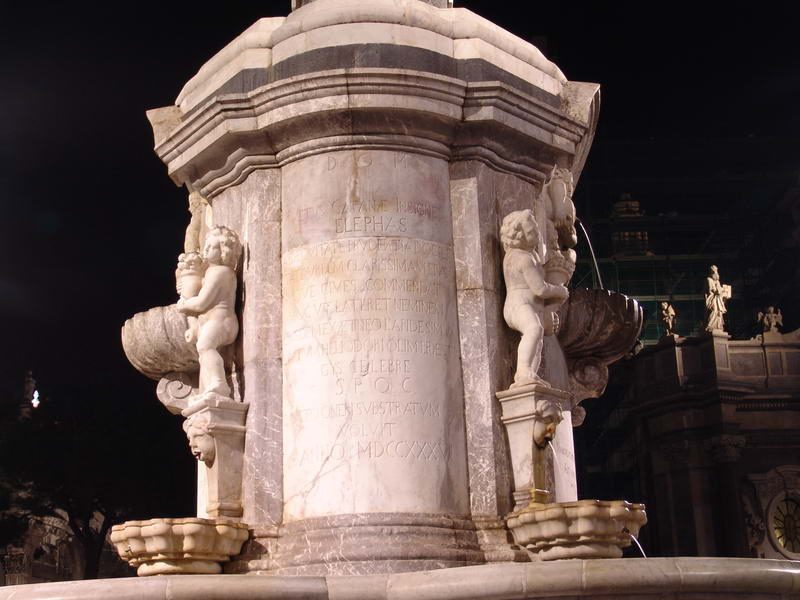 An ancient oral tradition of Catania, reported by Pitre [10], says that S. Agata was a beautiful weaver, a gentleman who asked her to marry her parents fell in love with her. Having no intention of getting married, S. Agata said that she would marry the man only after she had finished weaving a cloth. The canvas, however, was never completed because the Catania virgin wove by day and undoing the work done by night. Hence the saying:

It is like the tila of S. Aita, can never end,

The link with the legend of Penelope, which is Christianized and sanctified here, is also evident. 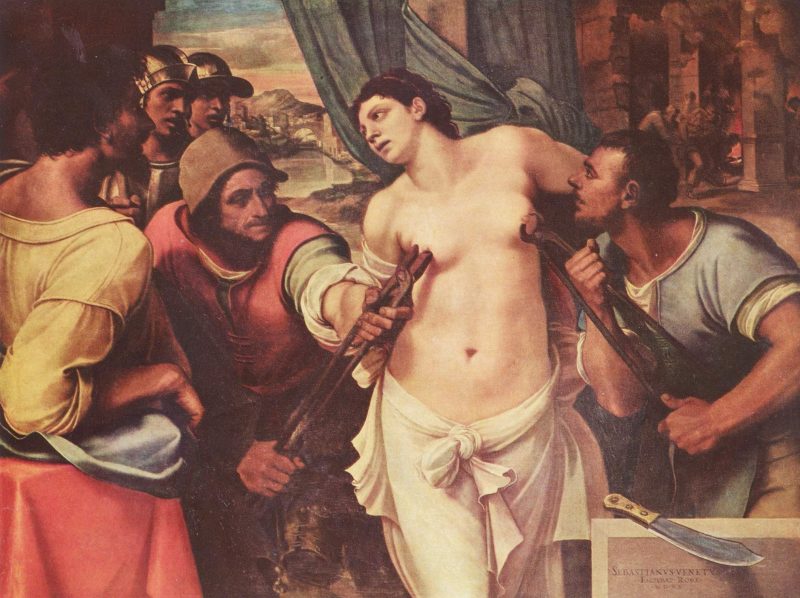 [3] Flora is an Italic deity, personification of spring, protector of flowers and youth.