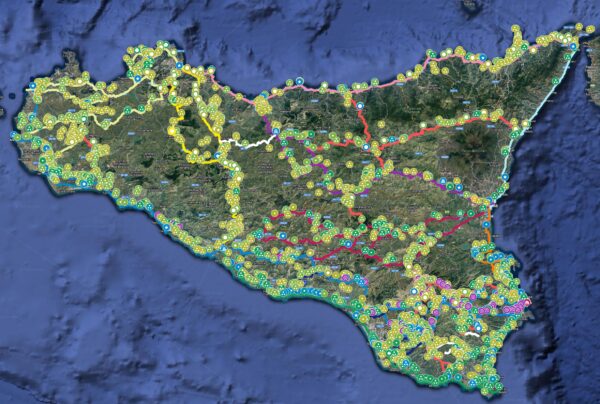 The "Ancient Paths and Historical Itineraries of Sicily" project is a non-profit, it is proposed solely as a cultural and scientific project open to the community and has a twofold objective:

The project is based on the following four pillars:

At the moment (December 2022), routes (basic routes) have been published for over 3.000 km of paths including the main Greek and Roman roads and the transversal ones mentioned by Biagio Pace. These streets, as Biagio Pace himself recalls, quoting Paolo Orsi, must be traced back, in many points, to more ancient times, dating back to the Siculi, Sicani, Elimi and other prehistoric populations. The project is carried out by Ignazio Caloggero and sees as promoters the Helios Study Center and AIPTOC - Italian Association of Tourism Professionals and Cultural Operators. From this page it will be possible to access the progress of the project and the in-depth articles related to it which will be gradually published. (refer to the page "The details" for further information)

It is clarified, where necessary, that the Paths identified and published online (in the various stages of incremental refinement: A, B and C) are NOT the Paths as indicated in Law 7 of 13/04/2022 of the Sicily Region but only one support tool for those who, however, want to create Paths that meet the requirements of Law 7/2022 of the Sicily region, reducing the possible risks of creating fake historical ones.

Ancient Walks and Historical Itineraries of Sicily: All routes live